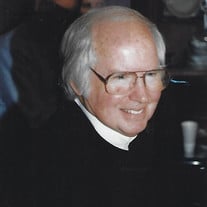 REVEREND MONSIGNOR WILLIAM RUSSELL JAMES was a prolific writer. He once wrote &#8220;the thought of death is a happy thought for me. What an exciting time when Gabriel blows his heavenly trumpet &#8230; and we have that journey of all journeys,... View Obituary & Service Information

The family of Father William Russell James created this Life Tributes page to make it easy to share your memories.