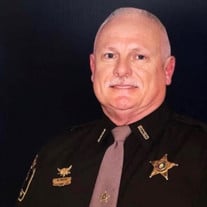 Deputy William H. “Bill” Smith, Jr. age 57, a native of Alexandria, Alabama and a resident of Gulf Shores, Alabama passed away Sunday, June 6, 2021. Bill was preceded in death by his parents, William H. Smith, Sr. and Marian A. Pate. He is survived by his wife, Samantha K. Smith, two sons, William H. “Bo” Smith, III and Michael Jacob "Jake" Smith; sister, Dr. Patty Pate Atkinson and her husband, Dr. John Atkinson and their children, Prescott, Shelby and Anna Lee. Funeral services will be held Saturday, June 12, 2021 at 2:00 p.m. at the Baldwin County Coliseum, 19477 Fairground Road, Robertsdale, AL 36567. The family will receive friends prior to the service beginning at 12:30 until the service time at 2:00 p.m. In lieu of flowers, memorials may be made to the Michael Malone Memorial Scholarship Fund 800 Veterans Road, Gulf Shores, AL 36542 or to the Baldwin County Sheriff’s Foundation, 310 Hand Avenue, Bay Minette, AL 36507. Bill truly had a servant’s heart. His career in Public Service began as a volunteer fireman while still in high school. He went on to become a Paramedic/Firefighter in Dekalb County Georgia. It was there in his 30 years of service, he rose through the ranks to Deputy Chief of Operations, receiving multiple Medal’s of Honor, Exceptional Merit Awards, as well as Firefighter of the Year. During his off time from Georgia, Bill was the Fire Chief in his hometown of Weaver Alabama, and was a mentor to countless volunteer firemen, otherwise known as “Bill’s Boys”. Many of them would go on to a professional career in the Fire Service. Bill also worked for Dale Jarret Racing Adventure as a driver/instructor, giving people the opportunity of a lifetime to ride in or drive a race car around various Nascar tracks in the Central and Southeastern US. Shortly after retirement from the Fire Service, Bill decided to begin a new career, this time in Law Enforcement. He was hired by Calhoun County Sheriff Department and sent to the Sheriff’s Training Academy, where he was elected President of his class. With a lifelong love of the beach, Bill applied and was hired at Baldwin County Sheriff’s Office. Bill loved his department, his co-workers, and was especially proud of his detail in Fort Morgan. He made fast friends with the Fort Morgan Fire Department personnel. Bill didn’t believe in giving anything less than 150% in everything he did, including loving his wife and children with every ounce of his being. It is said that your life is made of two dates and a dash. Bill’s dash was filled with passion, purpose, adventure, service to others, and most importantly, love.

The family of Deputy William H. "Bill" Smith Jr. created this Life Tributes page to make it easy to share your memories.