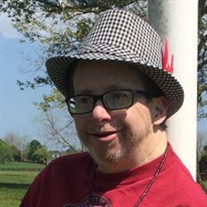 March 29, 1968 - February 15,2022 William Scott Foley, age 54 of Robertsdale, took his final journey to his heavenly home to be with his Lord and Saviour on February 15th. Scott was a graduate of Robertsdale High School, a member of Robertsdale United Methodist Church, and had a heart for Bethel Baptist Church, where he and his family served before his dad (Billy Foley) died in 1983. As a baby he was diagnosed with down syndrome and was given 16 years to live, but the Lord granted him many years to touch the lives of others. If you knew Scott, he loved the Lord, his family, his church and left a lasting impression with everyone he met. Scott loved life and had many opportunities to travel with his grandparents and his mother. He enjoyed the outdoors, especially hunting with his sidekick Dennis, and was known as "Green Turtle" on the CB radio. He also enjoyed business trips with Dennis and was appointed as VP of Stastka Insurance Agency. He loved attending Alabama Football games, but his heart was divided when it came to his Auburn family, Roger & Mary Barnhill, and Monty Harris. He took great joy in attending Southern Gospel singings and spending hours reading and studying his collection of many, many Bibles. He is survived by his mother, Joanne Clements Foley, brothers Troy (Teresa) Foley and Daryle Foley all of Robertsdale, many nieces, nephews, aunts, uncles and cousins, adopted parents Dennis & Joan Stastka, Roger & Mary Barnhill, and grandparents Harold & Carol Clendenin, along with his adopted sisters, brothers and grandchildren. He is preceded in death by his father William Billy Foley, grandparents Mr. & Mrs. G.W Clements and Mr. & Mrs. W.E. Foley of Robertsdale. Because Scott always "Had a Good Idea", it was his wish to be remembered with a Life Celebration Fellowship. In memory of Scott, join us Sunday, February 27th at Bethel Baptist Church @ 4:00 P.M. This will be a sweet time of reflection and fellowship around the table. Please come and bring a covered dish; "Classic Coke", Scott's favorite, will be provided, along with other drinks. Don’t’ be late, because Scott would say, “You snooze, you lose”. In lieu of flowers memorial gifts can be given to the following: Robertsdale United Methodist Church & Bethel Baptist Church.

March 29, 1968 - February 15,2022 William Scott Foley, age 54 of Robertsdale, took his final journey to his heavenly home to be with his Lord and Saviour on February 15th. Scott was a graduate of Robertsdale High School, a member of Robertsdale... View Obituary & Service Information

The family of Mr. William Scott Foley created this Life Tributes page to make it easy to share your memories.