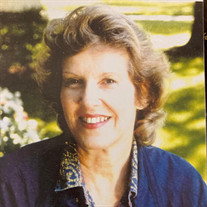 Virginia Ruth Harper Straka passed away peacefully at home, surrounded by her loving family, on February 13, 2022. Ruth was born on July 14, 1933, in Robertsdale, Alabama and was a lifelong resident of Baldwin County, Alabama. Ruth married Freddie Joe Straka on September 17, 1955. Fred was the love of Ruth’s life, and Ruth and Fred enjoyed 64 years of marriage before Fred’s passing in 2019. Ruth loved to tell the story of the first time she met Fred. Ruth was 13 years old and promised herself, “Someday I’m going to marry Fred.” Eight years later, Ruth’s wish came true. Ruth and Fred raised three daughters, Kathryn, Lisa and Dorie, and through the years the Straka family spent many wonderful days vacationing across the United States. Ruth and Fred always included the girls when they traveled. Ruth and Fred worked together to make the family business, Straka Trucking, one of the most respected and trusted truck brokerages in the southeast. When Fred and Ruth started the business in 1962, Ruth’s bookkeeping and office management skills were vital to the success of the business, and Ruth sacrificed her desire to be a stay-at-home mother in order to make the business a success. Ruth was good with numbers. Ruth calculated the mileage and rates, and kept the accounts. Ruth was in her element with numbers, no matter the application. Fred could request the phone number of any business contact or associate, and Ruth would simply recite the correct phone number without having to look it up. Ruth had the amazing ability to give the correct day of the week on which any date--future or past—fell. Ruth and Fred retired in 1996. After retirement, Ruth and Fred vacationed in Europe and took several trips to the Hawaiian Islands – their favorite vacation destination. In addition to travel, Ruth loved photography and sketching. Ruth liked photographing landscapes, flowers, and animals. And Ruth often sketched portraits of family members, friends, or just faces that Ruth said she “liked”. Ruth loved birdwatching, and put up bluebird boxes and hummingbird feeders to accommodate two of her favorite types of birds. Ruth was an avid reader, and enjoyed not only her study of the Holy Bible, but fiction of various genres. Ruth was an alum of Robertsdale High School, and kept in touch with classmates from her graduating class--the Class of 1952. Until it became too much for Ruth physically, Ruth was an frequent participant and supporter of the Alumni Scholarship Program, and helped raise funds at the annual Alumni Tea to provide scholarships to deserving Robertsdale High School seniors each year. Ruth loved to sing. And especially loved singing while her daughter, Dorie, played the piano and sang with her. Ruth loved to cruise. And especially loved cruising when husband Fred, daughter Kathryn, son-in-law Michael, and granddaughter Nicole were onboard. Having spent time as a child living on her Grandpa’s farm, Ruth loved chickens. Ruth collected artistic renderings of roosters and hens for years before Ruth’s daughter, Lisa, and son-in-law, Clay, moved home and gave Ruth a flock of her own. After that, on more evenings than not, Ruth had a supper of fried eggs and homemade bread baked by Clay, which Ruth thought was a supper that couldn’t be beat. Along with the chickens came a herd of dairy goats, whose antics Ruth loved to watch. And as the goat herd increased, Ruth fancied herself a “Goat Baroness”, and daily enjoyed fresh goat milk with breakfast. When her beloved Fred was alive Ruth enjoyed watching Alabama football with him. But in recent years began watching and enjoying sumo wrestling! Ruth was a devoted wife, mother and grandmother, sister, aunt and friend. She will be missed by all who knew her. Ruth is preceded in death by her husband, Fred Joseph Straka; her parents Violet R. McMaster (Harper) Sanders and Herman J. Harper; her brothers Vince Harper, Roy Harper, Eugene Harper and Don Harper, and sister Mary Harper Shepherd. Ruth is survived by her sister Doris Baittie of Chicago, Illinois; her daughters, Kathryn (Michael) Twilley of Mobile, Lisa (Clay) Cooper of Robertsdale, Dorie (Clarence) Burke of Magnolia Springs; her granddaughter, Nicole Twilley of Mobile; and many nieces and nephews in various states throughout the United States. Ruth’s family would like to thank caregivers Jennifer, Natalie, and Lora, as well as the palliative and hospice care staff who assisted the family over the past three months. Thank you. At a private graveside service held on February 18, 2022, at Memory Gardens of Fairhope, Ruth was laid to rest next to her beloved Fred.

Virginia Ruth Harper Straka passed away peacefully at home, surrounded by her loving family, on February 13, 2022. Ruth was born on July 14, 1933, in Robertsdale, Alabama and was a lifelong resident of Baldwin County, Alabama. Ruth married... View Obituary & Service Information

The family of Mrs. Virginia Ruth Straka created this Life Tributes page to make it easy to share your memories.