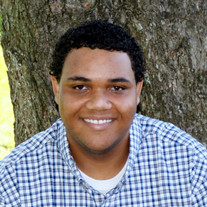 Tyler Daniel Cooper, 19, beloved son, grandson, nephew, cousin and friend passed from this earth on July 21, 2021. Tyler was born in Mobile, Alabama on January 15, 2002, but was raised in Baldwin County, Alabama. He was a 2020 graduate of Robertsdale High School and attended college and UTI of Houston. Tyler loved working on trucks and studied diesel mechanics. He never passed up the chance to learn something new, especially if it was a history lesson. Tyler truly enjoyed reading and music. Being his family’s kitchen chef was a passion of his. He took great pleasure in spending time with cousins and hanging out with friends. He was a lover of dogs and humanity. He never missed an opportunity to help someone in need. Tyler was a staunch protector of his mother and father. Tyler was the loving and devoted son and Kimberly Byrd Cooper and Charles Cooper of Baldwin County. Tyler was preceded in death by his grandmother Brenda Cooper and his great grandparents William Henry Collins, Sr. and Erlene Franklin Collins. Tyler is survived by his loving and proud parents. His grandparents, John and Patricia Jordan of Jackson, Alabama, Clyde “Petey” Cooper of Bay Minette, Alabama, great grandparents, John Henry and Ruby Jordan of Citronelle, Alabama, aunts Danielle (Randy) Waltman of Semmes, Alabama, Sheena (Torey) Siniard of Athens, Alabama, uncles, Chris (Melissa) Cooper of Robertsdale, Alabama and Robbie (Rebecca) Hall of Navarre, Florida and many beloved cousins and friends. Pallbearers will be Torey Siniard, Randy Waltman, Austin Clark, Scott Cooper, Chad Cooper, Robbie Hall, Tony Cooper and Jason Hadley. In lieu of flowers, memorials may be made to Alabama Literacy Association or ASPCA. Funeral services will be Monday July 26, 2021 at 2:00 p.m. from the chapel of Mack Funeral Home. A visitation will be held from 1:00 p.m. until 2:00 p.m. at Mack Funeral Home prior to the service. Burial will be in the Wynn Cemetery, Summerdale, AL. “Live as if you were to die tomorrow. Learn as if you were to live forever.”

Tyler Daniel Cooper, 19, beloved son, grandson, nephew, cousin and friend passed from this earth on July 21, 2021. Tyler was born in Mobile, Alabama on January 15, 2002, but was raised in Baldwin County, Alabama. He was a 2020 graduate of... View Obituary & Service Information

The family of Mr. Tyler Daniel Cooper created this Life Tributes page to make it easy to share your memories.