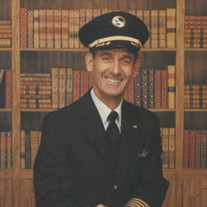 Tom Woodward died December, 10th, 2018, at his home surrounded by his family and friends. Thomas Albert Woodward was born June 26th, 1926, at his family’s home in Leon County, Florida. He was the youngest of four children born to George Edward Woodward and Mary Etta Woodward in Woodville, Florida, outside Tallahassee. He met Betty Harrell, who would become the love of his life, in elementary school. He enlisted in the Army Air Corps the month he turned 18 and served for two and a half years before being honorably discharged in January of 1947. Soon, he and Betty began dating. After returning from the war, he got his airplane mechanic license and then his pilot license in 1949. He and Betty were married February 16th, 1952, in Tallahassee. That would begin a marriage that would last over 66 years. As a flight engineer and pilot for Eastern Airlines, Tom and Betty moved to Miami (too hot) and New York City (too cold) before settling in Atlanta where they lived until his retirement from Eastern in 1986. Along the way their first daughter, Susan, was born soon to be followed by their second daughter, Sally. Adventurous and talented, he loved to fish, camp, hunt, and built his family homes, campers & playhouses throughout the years. Apart from his family and his work, Tom was a constant presence at his church. In Atlanta, Tom and Betty were active members of First Baptist Church of College Park. After retiring from the airline, Tom and Betty moved to Loxley, Alabama. Soon thereafter they joined First Baptist Church Silverhill where for over 30 years he was a deacon, an usher, and the creative force for countless church and VBS projects. Tom is survived by his wife, Betty; his daughters Susan (Rod) and Sally (Phillip); grandchildren Clint (Brigitta), Emily (Ryan), Brittany (Nate), and Ellis; and great-grandchildren Maleigha, Jack, Joanna, Thomas, and Henrik. Above all else, Tom was a man who loved his Lord and loved his family. He will be missed dearly, but his legacy will long outlast him. A funeral service will be held on Saturday, December 15th, 2018, 11:00 a.m., at First Baptist Church Silverhill. A visitation will be held two hours prior to the service beginning at 9:00 a.m. Burial will follow at Silverhill Cemetery. Funeral arrangements are by Mack Funeral Home & Crematory, Hwy 59 Robertsdale, AL.

Tom Woodward died December, 10th, 2018, at his home surrounded by his family and friends. Thomas Albert Woodward was born June 26th, 1926, at his family&#8217;s home in Leon County, Florida. He was the youngest of four children born to George... View Obituary & Service Information

The family of Mr. Tom Woodward created this Life Tributes page to make it easy to share your memories.