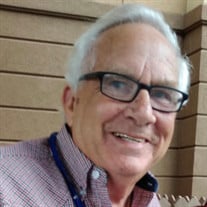 Thomas Arthur (Dave) Davis, 73, a native and resident of Loxley, AL, passed away Friday, February 5, 2021 of complications from COVID-19. He was born March 2, 1947 in Loxley, AL to Ruth Aebli and George Ervin Davis. Dave was a member of St. Patrick Catholic Church in Robertsdale, Mobile Roadrunners Camping Club, and Loxley Senior Citizens group. He loved collecting old books, especially those that were at least a hundred years old, and his lap cats Charlie and Lulu. In 1964 Dave left high school to pursue a career in the U.S. Army serving in Vietnam, Germany, and Hawaii as well as other places in the states. He served as a communications operator/mechanic with nine of those years being a Chief of communications-electronics operations. Dave received a number of awards including the Bronze Star Medal. After twenty years of service, he retired and made his home in Lawton, Oklahoma. Dave drove a truck for McKenzie Tank Lines for two years. He worked in the medical field in different capacities. Dave became a certified histologist working in several pathology labs before becoming manager of the Advanced Pathology Lab in Lawton, OK. In 2009 Dave moved home to Loxley, AL and worked for two years at Mobile Infirmary Pathology Lab before fully retiring. After 46 years of traveling the world, he married his childhood sweetheart from Loxley, Caren. They took many fun trips, including a trip to Italy. When they found Bandera, TX, they fell in love with all the wonderful dance halls, and dancing became their passion. Together they had a wonderful time making magic and memories. Dave is preceded in death by his parents Ruth Aebli and George Ervin Davis. He is survived by his loving wife of eleven years, Caren Bertagnolli Wilson-Davis of Loxley; children, Dixie Annette Dennison, Gerald Thomas Davis both of Kentucky, Susan Haddon (fiancé David Zeiler) of Michigan; grandchildren, Sabrina Oettle, Ethan and Taylor Haddon; great-grandchildren, Jaysin Oettle, Danielle Velapoldi; close friends, the Shaw family; stepchildren, Dena Caldwell (Mike), Kevin Wilson (Lisa); step-grandchildren, Sarah Catherine and Fairby Caldwell, Barrett Wilson; brother, Carl Davis; sisters, Janette Lammers (Fritz), Donna Moore (Tom); and several nieces and nephews. Services will be held Wednesday, February 10, 2021 at St. Patrick Catholic Church in Robertsdale, AL with Fr. Jim Morrison officiating. Visitation will be held in the Narthex from 1:00 p.m.- 2:00 p.m. with the Mass of Christian burial to follow. Mass will also be broadcasted outside the church for those who wish to remain in their car. He will be escorted by the Patriot Guard to the gravesite at Greenwood Cemetery in Loxley, AL. Arrangements are by Mack Funeral Home, Robertsdale, AL. In lieu of flowers, memorials may be made to St. Patrick School, P.O. Box 609, Robertsdale, AL 36567 or St. Patrick Church, 23035 Highway 59, Robertsdale, AL 36567.

Thomas Arthur (Dave) Davis, 73, a native and resident of Loxley, AL, passed away Friday, February 5, 2021 of complications from COVID-19. He was born March 2, 1947 in Loxley, AL to Ruth Aebli and George Ervin Davis. Dave was a member of St.... View Obituary & Service Information

The family of Thomas Arthur "Dave" Davis created this Life Tributes page to make it easy to share your memories.

Thomas Arthur (Dave) Davis, 73, a native and resident of Loxley,...