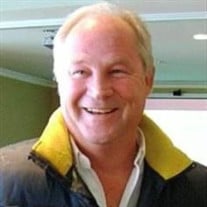 Thomas Austin Auner, age 68, died on Thursday, August 26th in Summerdale AL. Called “Tad” in his youth by friends and family, and “Austin” in later years, he was a beloved husband, father, son, brother, and friend. He was loved by all. No one who knew him will ever be able to forget his voice booming “top of the morning to you!” over the phone, or his boisterous laugh. Austin was born on June 24th 1953 in Jacksonville IL, where he spent all of his formative years. He later attended the Missouri Military Academy in Mexico MO, and the Coastal School of Deep Diving in Oakland CA. His early career was spent in underwater oil exploration, first in the Gulf of Mexico, operating out of Morgan City LA, and later in Southeast Asia, operating out of Singapore. His adventures there included confrontations with pirates and the rescue of refugees escaping from Vietnam on boats. He once swam with a whale-shark in open water. He caught malaria, and nearly died. Upon returning to the US, he worked as a quality control expert for various nuclear power plants, and later worked in construction, building renovation, and real estate, right up until the time of his death. But no matter what career path he was on, or what circumstances he found himself in, Austin always approached everything with good humor, unerring positivity, and infectious zest for life. He is survived by his wife, Deanna of Summerdale AL, and their four children Julia, Claire, Collin, and Joel, and by his eldest son from his first marriage, Jared of Olympia WA, as well as his sisters Anne, Ginda, and Penelope and brother John, and all of their families. He will be deeply missed by everyone. A memorial service will be held on Saturday, Sept 18th at 11:00am at Marlow United Methodist Church in Summerdale, AL.

The family of Thomas Austin Auner created this Life Tributes page to make it easy to share your memories.