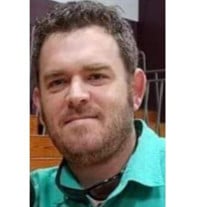 Steven Lamar "Scuba" Fowler, Jr. was born February 8, 1979, passed December 23, 2020. He was at home when he passed surrounded by his family and few close friends when he went to be with the Lord and met his Dad. He was born in Birmingham, Alabama to Steven L. Fowler, Sr. and Moneica Patrick Fowler. Steven graduated from Tate High School, top 25 in class, in Cantonment, FL in 1998. His younger years, he played baseball for Cantonment Leagues. In high school he was in Marching Band and Jazz Bands that allowed him to travel a lot. He went on to pursue a Degree in Music at PJC in Pensacola. There he was in Jazz band, symphony band and concert. He grew up in Pensacola most of his life. His last years were spent on the Gulf Coast area of Alabama. He married Andrea Sims and moved to Nashville, TN to follow his music dreams. He was in a Christian Rock Band and they were all close friends. They had a daughter on November 19, 2005, Alauna Marie Fowler. She was the light of his life. He worked down through the years in customer service in Communications. He constantly played music his entire life where his passion was. He always played in Church wherever he was. He was one of the best drummers, ever. He was an awesome Saxophone player, played guitars and keyboard. He was so talented. He was also a music engineer and producer. He loved Alabama football with a passion. He is survived by his Mother, Moneica C. Patrick Fowler, Daughter, Alauna Marie Fowler, Brother Seth Allen Fowler and Sister Karen Kilpatrick. He has many nieces and Nephews and relatives. He is preceded in death by the recent passing of his Father, Steven Lamar Fowler, Sr., his Grandfather, Rev. J. Leon Patrick, his grandparents, R. Jack Fowler and Mary Bardin Fowler and more relatives to greet him. He was an awesome friend to many and Uncle and cousin. He will be missed beyond Words can ever express. Funeral services will be held Tuesday, December 29, 2020 at 2:00 p.m. at the Clear Springs United Methodist Church with a visitation one hour prior to the service. Burial will be in the Clear Springs Cemetery.

Steven Lamar "Scuba" Fowler, Jr. was born February 8, 1979, passed December 23, 2020. He was at home when he passed surrounded by his family and few close friends when he went to be with the Lord and met his Dad. He was born in Birmingham,... View Obituary & Service Information

The family of Mr. Steven Lamar "Scuba" Fowler, Jr. created this Life Tributes page to make it easy to share your memories.