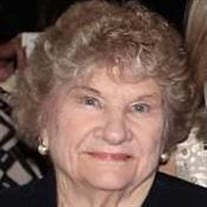 Mrs. Ruth Marie Taylor Pittman, age 88, a native of Bay Minette, Alabama and resident of Rosinton, Alabama went to meet her Lord, surrounded by family, on Thursday morning February 11, 2021 in her home after a long battle with vascular dementia. Ruth was a graduate of Baldwin County High School where she excelled in math. She enjoyed using her math skills to teach her children and grandchildren their multiplication facts. She worked for a while in banking and later in finance in Mobile, Alabama. And while she had an opportunity to attend college, she chose to marry George Herbert Pittman on August 13, 1951. She soon moved to the Pittman Farm on County Road 64 in Rosinton, Alabama. From then on, Ruth devoted her life to Herbert and worked on the farm while raising four children, three daughters and a son. During those years she lived a busy life, helping manage the farm and family for Herbert and his parents Joe and Jimmie Lee, while Herbert worked as a papermaker. As a mother, she often taught her children pre-school skills, while ironing clothes each day and managing the farm accounts, tax preparation, and daily tasks required to maintain a farm and livestock. As years passed, her life was filled with sewing, picking and canning vegetables; milking cows at dawn; churning and making butter; killing and cleaning chickens; cleaning and cooking deer meat, squirrels, rabbits, quail, and doves; traveling with Herbert around the country with a travel club; attending church and Beulah Church Camp meetings; rarely missing her children's and grandchildren's sports, school, and church events; going to University of Alabama football games with the family on the weekends; traveling to Cade's Cove, Tennessee with the family to see the colors almost yearly. Ruth regularly attended and served the Lord at the Rosinton United Methodist Church, where she became a member and was baptized by Reverend Aubrey Massey in the 1960's. When Ruth and Herbert invested in registered cattle, she became an active member of the Alabama Cattlewomen's Association. She was voted Mother of the Year by The Baldwin County Cattlewomen in 2005. Anyone who knew her could see that she deserved that honor as a selfless leader, mother, and caregiver. Ruth was also a talented seamstress and quilter. For years she made clothes for her three daughters and later created a quilt for each of her four children. She never left Herbert's side until her untimely passing and would have celebrated her 70th Wedding Anniversary in August. Ruth is preceded in death by her youngest brother Jimmy, father Charles Edwin Taylor, mother Margaret Stover Taylor Carlini, brother Charles Taylor, Jr., and sister Alice Campbell. Ruth is survived by her husband of 69 years George Herbert Pittman, Sr.; four children Donna Boswell (Bobby), Peggy Duck Branch (Jimmy, deceased; Gary), JoAnne Stapleton (Cliff), George Pittman, Jr. (Kristina, fiancée); five grandchildren James Robert Duck, Jr., Melinda Harville ( Scott), Robert Boswell, Jr. (Catherine), Austin Pittman (Heather), Cody Pittman (Lilah, fiancée); three great grandchildren Hayden Harville, Mylee Harville, Cameron Harville; two sisters Carolyn Gates ( Jim, deceased), Mary Lois Childress (Julius, deceased); many nieces and nephews and grand nieces and nephews. A graveside service will be held on Tuesday, February 16 at 2:30 p.m. at the Pittman Cemetery on Pittman Cemetery Road, County Road 64 Ext. Due to Covid concerns, the service is for family and closest friends. Please wear a mask and practice social distancing to protect others. Parking is limited but will be coordinated by family friends. The service will be officiated by Pastor Chad Johnson of the Rosinton United Methodist Church and former Pastor Kevin Krist. The family requests that memorial donations be sent to The Pittman Community Cemetery sponsored by area churches (Director Al Clingan, 29533 Co. Rd. 64, Robertsdale, AL 36567). Flowers accepted on the day of the service at the Pittman Cemetery or at the George Herbert Pittman, Sr. home, 29300 County Road 64, Ext. Robertsdale, AL 36567. The family wishes to thank Community Hospice and Sisters That Care for their wonderful care and support of Ruth and her family.

Mrs. Ruth Marie Taylor Pittman, age 88, a native of Bay Minette, Alabama and resident of Rosinton, Alabama went to meet her Lord, surrounded by family, on Thursday morning February 11, 2021 in her home after a long battle with vascular dementia.... View Obituary & Service Information

The family of Mrs. Ruth Marie Taylor Pittman created this Life Tributes page to make it easy to share your memories.