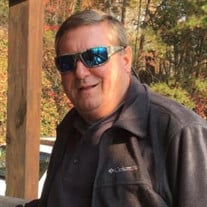 It is with heavy hearts to announce the passing of our very loved husband, father, "Op's" and friend Robert Michael Sheffield "Mike", a native of Mobile, AL, and resident of Orange Beach. He passed away on November 24th surrounded by his family at South Baldwin Hospital after a short battle with cancer. Mike has been in the towing industry for 50 years and was the owner and founder of Hub City Towing. He was a member of the Azalea Lodge 898, a 32nd Degree Master Mason, and a member of the Shriners Organization. He was a former member of numerous Mardi Gras organizations and the parade coordinator of The Joe Cain Parading Society. He was an avid Alabama football fan and enjoyed anything to do with cars, motorcycles, boats, and of course tow trucks. Mike was truly larger than life, he never met a stranger. Almost any weekend you could find him entertaining his family and friends and during the weekday evenings you would find him poolside with his Ole River family enjoying cocktail hour. He got the greatest joy out of helping others. He was the hardest worker and lived by the motto of "work hard play harder." Mike was married for 33 years to the love of his life and was a very proud father, father-in-law, and grandfather. His father-in-law and mother-in-law Wayne and Sheila Stevens and sister-in-laws and their families were very special to him. Mike lived his life to the fullest and will be tremendously missed by many. Mike is preceded in death by Dalton Sheffield (father) Leta Belle Sheffield (mother), Dalton Sheffield (brother), Nancy Sheffield (sister). Mike is survived by his loving wife Lori Sheffield, daughters Brittany Miller (Nathan), Melissa Bull (Ryan), Presley Ryan (Jeffrey), son William Sheffield (Krystal), and grandchildren Waylyn Miller, Ryleigh Bull, Michael, Seth, Andrew, and McKenzie Sheffield, father-in-law and mother-in law Wayne and Sheila Stevens, sister-in-law Jeanie Hammett (Larry) and Heather Catlin (Ben) and nephews Saylor Hammett, Tristan, Brandan, Nathan, Evan Catlin and niece Marina Hammett, and Toni Freatas (sister) and dear friend Benny Snow . Mike's very dear family and friends who will be his pallbearers are: Nathan Miller, William Sheffield, Ryan Bull, Jeffrey Ryan, James Mack, Michael Sheffield, Andrew Sheffield, and Seth Sheffield. Honorary pallbearers: Wayne Stevens, William "Buddy" Clark, Joe Mramor, Mike Stewart, Michael Stewart, Robbie Perry, Steven Marcus, Bobby English, Mike Myrick, Edward Godbold, John Francis, and Kenneth Williams. We would like to give our sincerest thanks to M.D. Anderson Sarcoma Center, Mitchell Cancer Institute, and Pilots for Christ. Funeral service will be Wednesday, Dec. 1, 2021 at 2:00 p.m. from the chapel of Mack Funeral Home with a visitation beginning at 12:30 p.m. Burial immediately following at Pine Rest Memorial Park, Foley, AL. In lieu of flowers donations can be made to M.D. Anderson Cancer Institute and Pilots for Christ.

It is with heavy hearts to announce the passing of our very loved husband, father, "Op's" and friend Robert Michael Sheffield "Mike", a native of Mobile, AL, and resident of Orange Beach. He passed away on November 24th surrounded by his family... View Obituary & Service Information

The family of Mr. Robert Michael "Mike" Sheffield created this Life Tributes page to make it easy to share your memories.

It is with heavy hearts to announce the passing of our very loved...