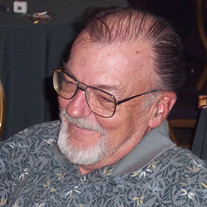 Robert Edward “Bob” Landers, a long-time Robertsdale, Ala., resident, died July 4th, 2019, at Sacred Heart Hospital in Pensacola, Fla. at the age of 79. Bob was born Nov. 8, 1939, in Syracuse, N.Y. At age 17, he joined the U.S. Air Force and served as a radio technician until his retirement in 1976 at the rank of Tech Sergant. Following his career in the military, Bob worked as regional manager for Bally’s Aladdin’s Castle for nearly 30 years. Two weeks following their blind date in 1961, he married his wife of 58 years, Barbara. Bob loved music. During his military career, he worked as a DJ for Armed Forces Radio in Turkey and in the Azores and found joy and many friends in his retirement hosting an online radio program under the name “OldBob,” where he played mostly classics from the 1950s and 60s. In addition to Barbara, Bob is survived by his children, daughter, Joanne Griffith; son-in-law, Dennis Griffith; son, James Landers; and son, Robert Landers Jr.; sister, Pat Golley; five grandchildren and five great grandchildren. A funeral Mass will be at 10 a.m. Monday, July 8, at St. Patrick’s Catholic Church in Robertsdale, Ala. In lieu of flowers, please send donations to St. Patrick’s Catholic Church Carpet Fund at 23035 AL-59, Robertsdale, AL 36567

The family of Mr. Robert E. "Bob" Landers created this Life Tributes page to make it easy to share your memories.