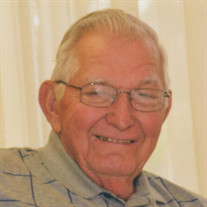 Richard Allen Ard, Sr., age 83, a resident of Silverhill, passed away on April 3, 2019 at Thomas Hospital in Fairhope, Alabama. He was born July 10, 1935 at the family home in Summerdale (Baldwin County) Alabama. He was the eighth of thirteen children born to Charles D. Ard and Della Howard Ard (10 boys and 3 girls). He is survived by two sisters, Helen Kilgore of Mobile and Essie Underwood of Foley, his wife of almost 59 years, Marjorie Meyer Ard, four daughters Lucy (Mark) Fowler (Montgomery), Lisa (Martin) Spencer (Silverhill), Nancy (Tim) Spencer (Silverhill), Penny (Donnie) Avera (Fairhope), one son Richard (Brenda) Ard Jr. (Loxley), 12 grandchildren, 12 great grandchildren. He served a short time (3 weeks) in the U.S. Navy and received an honorable (medical) discharge when it was discovered that he was hard of hearing and was always 1 or 2 steps behind the other recruits in basic training. Richard worked hard most of his life. He left home with only what he could carry on his back as he walked down the dirt road. He began learning about printing at the age of 18 when he began working at the Fairhope Courier newspaper. He and his wife Marjorie were owner/operators of Ard’s Printing Company in Robertsdale for 54 years, April 1, 1965-April 1, 2019, and raised their children in the business. Active in community service, he served on the first board of directors of the Central Baldwin Chamber of Commerce. He was a member of the Cattlemen’s Association, a former member of the Loxley Optimist Club, a former member of the Robertsdale Kiwanis Club and a former member of the Gideons. Richard was an active member and deacon of Belforest Christian Church, where he attended many years. Previously, he was a deacon at Robertsdale Christian Church. Richard was an awesome husband, father, grandfather, great grandfather, and friend to many. He was a very patient teacher and mentor, and taught by example. In addition to printing, Richard enjoyed farming; some might say it was his hobby. His small herd of cows kept multiplying and people often stopped to watch him let the cows across the road. At the time of his death, he had 13 calves, 16 cows, and 1 bull. He enjoyed growing blackeyed peas, corn, okra, watermelon, and other crops, which he frequently shared with others. He will be greatly missed by all who knew him. A funeral service will be held at Mack Funeral Home Chapel, Monday, April 8, at 10 a.m. Burial will follow at Rock Cemetery. Visitation will be at Mack Funeral Home on Sunday, April 7, 6-8 p.m. In lieu of flowers, donations in his memory may be sent to St. Jude’s Children’s Research Hospital, 501 St. Jude's Place, Memphis, TN 38105 or to Gideons International.

Richard Allen Ard, Sr., age 83, a resident of Silverhill, passed away on April 3, 2019 at Thomas Hospital in Fairhope, Alabama. He was born July 10, 1935 at the family home in Summerdale (Baldwin County) Alabama. He was the eighth of thirteen... View Obituary & Service Information

The family of Mr. Richard Allen Ard Sr created this Life Tributes page to make it easy to share your memories.