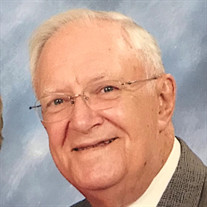 Milton “Lamar” Trawick was born in the Crossroads Community of Bay Minette, AL on January 8, 1932 and passed away at home in Foley on November 7, 2018. He received degrees from Mercer University and New Orleans Baptist Theological Seminary . Lamar served 27 years as a Navy Chaplain, serving with both the Navy and the Marines. Prior to and after his military service, he pastored churches in Alabama, Georgia, South Carolina, California and Hawaii. Lamar was preceded in death by his parents, Emmett and Thelma Trawick. He is survived by his wife and soulmate of 29 years, Phyllis Spencer Trawick; daughter, Sarah Yost (Ollie); son, Sam Trawick (Angie); step-sons, Rodney Legates and Bryan Legates (Regina); brother, Jeff Trawick (Amy); nine beloved grandchildren and one great-granddaughter. Throughout his life, whether baptizing at the beach in Hawaii, holding prayer meetings in the redwoods of California, or bringing comfort to American soldiers and villagers in Vietnam, Lamar always sought to bring the love of Jesus to others through compassion and action. He was a loving grandfather who always had time for his grandchildren.-teaching them to whittle, fish, fly kites, and love music. He will be sorely missed by all those who loved him. A celebration of life service will he held on Tuesday, November 13, 2018 at noon at Summerdale First Baptist Church in Summerdale, Alabama. The family will receive friends one hour prior to the service. Interment with military honors will be at Alabama State Veterans Cemetery in Spanish Fort at 2:30 p.m. In lieu of flowers, the family request memorials be made to the Summerdale First Baptist Church Building Fund, P.O. Box 145 Summerdale, AL 36580. Funeral arrangements are by Mack Funeral Home & Crematory, Hwy 59 Robertsdale, AL.

Milton &#8220;Lamar&#8221; Trawick was born in the Crossroads Community of Bay Minette, AL on January 8, 1932 and passed away at home in Foley on November 7, 2018. He received degrees from Mercer University and New Orleans Baptist Theological... View Obituary & Service Information

The family of Mr. Milton Lamar Trawick created this Life Tributes page to make it easy to share your memories.

Milton “Lamar” Trawick was born in the Crossroads Community of...