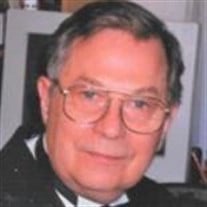 Milton John Gustafson, Jr., 92, of Granby, beloved husband for 20 years, of Lydia Elizabeth (Woodmansee) Gustafson, passed away on Tuesday, August 6, 2019, surrounded by his family at his home. Born in Silverhill, AL on April 14, 1927, son of the late Milton John Gustafson, Sr. and Agnes (Pearson) Gustafson, he was raised in Silverhill, AL and was a graduate of Georgia Military College in Milledgeville, GA and Clinton High School in Clinton, TN. After high school, Milton served in the Merchant Marines for seven years working on oil barges all over the world. After his service, he moved to Maine and apprenticed in metal shop where he learned metal fabricating and other skills that he would continue to use throughout his life. He later enrolled at the University of Maine where he graduated with a bachelor's degree in mechanical engineering with the Class of 1957. After graduation, Milton started his career in the aerospace industry with General Electric in Lynn, MA. Throughout his career he was granted several patents for his work and he traveled throughout the United States working for the most prestigious aerospace companies in the world. His last position was as a design engineer for Kaman Aerospace in Bloomfield where his worked for 17 years until his retirement in his early 70's. Milton's thirst for knowledge led him to immediately start, Gustafson Engineering, an aerospace design engineering consultancy company that maintained for 20 years. In his spare time, he enjoyed working in his metal workshop at home and fabricating gifts for his family and friends. Milton earned his private pilot's license at a young age, a hobby he enjoyed throughout his life. He loved to fly to Nantucket and Martha's Vineyard and enjoyed many years as a member of a flying club at Skylark Airport. A Master Mason, Milton was a member of Bethlehem Lodge, #35, A.F. & A.M. in Augusta, ME, Maine for over 50 years. Most of all, Milton enjoyed tending to this vegetable garden at the Granby Community Garden, spending time with his wife and family, and fixing things around his home. Milton was humble and kind in every way. He always had a quick joke to tell and make people laugh and was the consummate engineer always interested in how things work or how he could make them better. His magnetic personality endeared him to everyone who met him. Growing up during the Great Depression and having left home at the age of 14, Milton was very resourceful and learned to make do with very little. Besides his wife, he leaves a son, Gary Gustafson, MD and his wife Cindy of Kalamazoo, MI; seven grandchildren, Micah, Sarina, Josiah, Ariana, and Mathias Gustafson all of Kalamazoo, MI, and Ramsay and Chapin Eyre both of Dorset, VT; a brother, David C. Gustafson, M.D. and his wife Audrey of Holland, MI; two stepchildren, Elizabeth Bligh Eyre and her husband William of Dorset, VT and Andrew R. Simpson and his significant other, Debra Sweet of Torrington; and four nieces and nephews, Eric Gustafson, M.D. and his wife Linda of Holland, MI, Sonia Thompsen and her husband Rob of Vienna, VA; Karin Walen and her husband Zach of Seattle, WA, and John Gustafson of Arlington, VA. Besides his parents, he was predeceased by a daughter, Laura Holden. A memorial service will be held on Thursday, August 8, 5 p.m., at the South Congregational Church, 242 Salmon Brook St., Granby. Graveside funeral services and burial will be in Silverhill Cemetery, Silverhill, AL Monday, August 12, 2019 at 11:00 a.m. Memorial donations may be made to the American Cancer Society, 825 Brook St, I-91 Tech Ctr., Rocky Hill, CT 06067.

Milton John Gustafson, Jr., 92, of Granby, beloved husband for 20 years, of Lydia Elizabeth (Woodmansee) Gustafson, passed away on Tuesday, August 6, 2019, surrounded by his family at his home. Born in Silverhill, AL on April 14, 1927, son of... View Obituary & Service Information

The family of Mr. Milton John Gustafson Jr created this Life Tributes page to make it easy to share your memories.