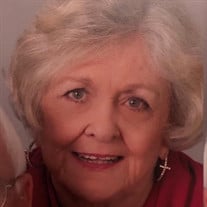 Mary Johnson "Jonnie" Harding McDaniel, age 77, of Robertsdale, Alabama left our earthly plane on February 12, 2020 at South Baldwin Regional Medical Center in Foley after a long battle. She was surrounded by her loving family at the time of her passing. Mary was born on May 17, 1942 in Orangeburg County, South Carolina to Robert Caswell Harding Jr. and Myrtle Johnson, who both pre-deceased her. Having grown up in Foley, she fondly told stories of being a majorette in the Foley High School band and was a 1960 FHS graduate. Mary studied at Saint Joseph's Infirmary School of Nursing in Georgia and spent her career as a school nurse in Baldwin County. Mary was married to the love of her life, Elmer Garrett McDaniel in 1964. They settled in Robertsdale and were married for 56 years. They shared a beautiful life together. Fondly remembered as Gambie, she was a fanatic Auburn fan and loved everything Auburn with all her heart. She adored life and spent hers traveling with her husband, spending a lot of time in their second home of Townsend, Tennessee. Little Lagoon was another of her favorite places, where she spent many days on the pontoon boat and eating fresh mullet. Mary had a quick wit and humor about her that lightened any situation. She deeply loved animals (especially birds) and her family. She loved hard and she lived full. She is survived by her husband, Elmer McDaniel; brothers, Bob (Rita) and David (Beverly) Harding; her sons Mark (Pam), Michael (Brannon) and Miles (Robina) McDaniel; bonus son Brad (Brandi) King; grandchildren Morgan, Madison, Mason, Ben and Paige McDaniel, Wil and Mary Michael King, Christen (Dylan) Hopper, Sherrel (Brad) Hinkel, and Miranda (Tyler) Dunnam; sister-in-law Mitzie (Randy) James and brother-in-law Ronnie (Mary Carolyn) McDaniel; many nieces, nephews, cousins; her great-grandchildren and her puppies, Lulei and Jinx, who'd she'd be pleased to know were included here. Services are to be held at Robertsdale United Methodist Church in Robertsdale, Alabama on Saturday, February 15, 2020 with visitation starting at 9 and the funeral service beginning at 10 with burial following directly. Funeral arrangements are being handled by Mack Funeral Home.

Mary Johnson "Jonnie" Harding McDaniel, age 77, of Robertsdale, Alabama left our earthly plane on February 12, 2020 at South Baldwin Regional Medical Center in Foley after a long battle. She was surrounded by her loving family at the time of... View Obituary & Service Information

The family of Mrs. Mary McDaniel created this Life Tributes page to make it easy to share your memories.