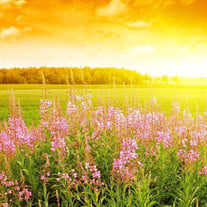 Mary Helen Douglas “Helen”, 85, of Silverhill, Alabama passed away at her home on Wednesday, September 5, 2018 surrounded by family. Helen was born on July 9, 1933 to Stanley and Bessie (Heidelberg) Mazel. She grew up with her brother, Arnold and her sister, Elsie on a farm with a love for being outside and spending time with her family. She married her high school sweetheart, Charles Douglas, in 1953. Together they have two daughters, Deborah and Cecilie. She was active in the PTA while her daughters were in school. She worked alongside Charles at Lee’s Florist and later at D & M Greenhouse. She regaled her family with stories of meeting so many people decades later that remembered her from her florist. Helen always had a green thumb and enjoyed spending time tending to her flowers in her gardens at home. Her green thumb was only matched by her knack for cooking and baking. She was even featured in a local cookbook for her famous Czech kolaches. She enjoyed baking, knowing that it encouraged her family and friends to come to the house, have coffee, to share stories and laughter, and to, most importantly, spend time together. Helen had a deep love for her family and treasured her time with them. Helen leaves behind her husband of 65 years, Charles Douglas, her daughters Deborah (David) Andrews and Cecilie (Kris) Hall, grandchildren Brandon (Erica) White and Alexandra Sconfienza, two great grandchildren Riley and Kayden, and one sibling, Elsie Mazel Gilliland. She is preceded in death by her parents and her brother Arnold Mazel. Graveside funeral services will be held Sunday, September 9, 2018 at 11:00 a.m. at Silverhill Cemetery. Flowers may be sent to Mack Funeral Home or if preferred, donations may be made to St. Jude in memory of Helen Douglas.

Mary Helen Douglas &#8220;Helen&#8221;, 85, of Silverhill, Alabama passed away at her home on Wednesday, September 5, 2018 surrounded by family. Helen was born on July 9, 1933 to Stanley and Bessie (Heidelberg) Mazel. She grew up with her brother,... View Obituary & Service Information

The family of Mrs. Mary Helen Douglas created this Life Tributes page to make it easy to share your memories.