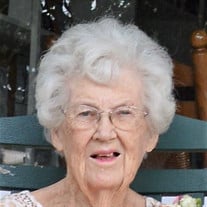 Martha Sophia Olson Wigstrom, born at home August 29, 1916 to her parents, John and Caroline (Lena) Olson, natives of Sweden and Norway passed away Friday, August 4, 2017 at the age of 100. Her early years were always attending the Zion Lutheran Church with her family with horse and buggy as transportation. After completing the confirmation class, she was confirmed in the church at an early age. Always walking to school, she finished Silverhill Elementary School (later the Edgard home) and one year at Robertsdale school, leaving 9th grade to help on the farm and cow milking due to poor health of her father. In 1937, at the age of 21 years old, she married. As the years passed, she had six children. Losing two, her four daughters; Helen, Grace, Gloria, and Irene all live close in this area. For many years, she attended the Silverhill Covenant Church with her daughters and some of the time even singing in the choir. In her spare time, she enjoyed making rag rugs on her Swedish loom (which she still has). Family and friends always enjoyed her gifts of handicraft. Also, all of her embroidery talents were and still enjoyed to this day by many. One of her favorite days of each month was the Silverhill Extension Club Meeting which she had been a long time member. It was always as informative and with the group of ladies, an interesting social hour. Always dedicated to her family and always worked to support her family at various places of employments, her last place was the Foley Nursing Home for 16 years. She retired in 1981. A life long resident of Silverhill for 100 years. Survivors include four daughters: Helen (Donald) Peterson of Robertsdale, AL, Grace (Roland) Wilson of Elsanor, AL, Gloria (Eddie) Pratt of Robertsdale, AL, Irene (Don) Joullian of Silverhill, AL; six grandchildren and four great grandchildren. Graveside funeral services will be held Monday, August 7, 2017 at 10:30 a.m. at the Silverhill Cemetery. A visitation will be held from 9:00 a.m. until 10:00 a.m. at Mack Funeral Home. Arrangements are by Mack Funeral Home, Hwy 59 Robertsdale, AL. www.mackfuneral.com

Martha Sophia Olson Wigstrom, born at home August 29, 1916 to her parents, John and Caroline (Lena) Olson, natives of Sweden and Norway passed away Friday, August 4, 2017 at the age of 100. Her early years were always attending the Zion Lutheran... View Obituary & Service Information

The family of Ms. Martha Sophia Olson Wigstrom created this Life Tributes page to make it easy to share your memories.