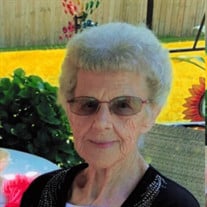 Margene Watson, age 85, a resident of Loxley, Alabama, passed away Thursday, March 10, 2022 surrounded by her loving husband of 68 years, her daughters and and family. Margene and Don lived in Cahokia, IL. until 1985 where she worked with Prince Gardener,(fine leather goods). They Moved to Milstalt, IL. where they lived until 1997. Gean worked as a cafeteria worker, part time, with St. Mary's Catholic School. A job she loved very much. She was a caregiver to her mother and father-in-law until their passing. She and Don moved south to Loxley, AL.in 1997 where that became their home for the last 25 years. Gean always worked with her hands in every capacity possible. She loved sewing and made some beautiful clothing for herself as well as others. Her love for Gods beauty was all around her home and yard. Her flowers and plants were her pride and joy to watch and nurture. She loved being outside and cutting the grass for others. She and Don worked together cleaning churches and homes. They attended Loxley Church Of God as often as they were able to. Her love for her Lord and Savior was evident in the way she lived her life. Gean loved family get togethers and would share many stories of childhood years. Her daughters, along with their families were her heart. She prayed daily for everyone. She could talk and never get tired for hours on end in conversations with her family. She will be greatly missed by all of her family and friends. Margene was preceded in death by her parents, Clarence Mobley and Elna Grace Mobley, a son, Robert Watson, sisters: Ruth Lambeth, Erma Jean Schrieber, Elinor Jo Ann Mobley, brothers: Harold Mobley, Carroll Mobley, and Ronnie Mobley. Left to cherish her memory is her husband, Donald Watson of Loxley, daughters Peggy Beane (Charlie) of Robertsdale, Shari Daidone, of Daphne. Grandchildren Brian and Daniella Chandler (Emma) of Atlanta, GA.: Donnie and Melinda Chandler (Thomas) of Yazoo City, MS.: Brandon Kitson of Olive Branch, MS.: Alexandria Kitson and Victoria Kitson of Loxley. Her siblings, Myrlene Williams of Bartow, FL.: Charles Mobley, Billy Mobley (Sally) of Lake City, FL.: James Mobley of Saraland, Gail Torres (Sergio) of Collinsville' IL.; Shelia Adair (Bob) of Edwardsville, IL.: Debbie Bemis (Denny) of Bon Secour, Steve Mobley (Rhonda) of Magnolia Springs, and many other family and friends. Funeral services will be held on Tuesday, March 15, 2022 at 10:00 am. at The Loxley Church of God. The family will receive friends from 9:00 until 10:00. Burial will be in Jubilee Memorial Gardens in Daphne. Pallbearers will be Brian Chandler, Donnie Chandler, Josh Adair, Rob Adair, Alan Bemis and Connor Gehr.

Margene Watson, age 85, a resident of Loxley, Alabama, passed away Thursday, March 10, 2022 surrounded by her loving husband of 68 years, her daughters and and family. Margene and Don lived in Cahokia, IL. until 1985 where she worked with Prince... View Obituary & Service Information

The family of Margene Watson created this Life Tributes page to make it easy to share your memories.