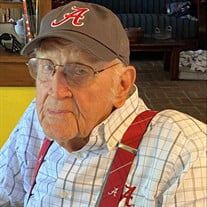 In the early hours of September 7th Malcolm Harold “Bub” Fosberg of Silverhill passed away at his home, surrounded by family, at the age of 92. Bub was born to Harold and Ruth Fosberg December the 6th, 1927. He graduated from Robertsdale High School and after graduation he went to work at his father’s furniture store. In April of 1947 he married the love of his life, Josephine Douglas, and together they raised two children, Larry and Sandra. After his father closed the furniture store, Bub worked for Gulf Life Insurance Company until he retired in 1990. Bub was a life long member of Silverhill First Baptist Church, a church he loved dearly, and where he served as a deacon and a member of the choir. He was also an active member of the Masons and the Order of the Eastern Star. In his spare time, he loved to build and refinish furniture. He was also known as quite the prankster and was always making people laugh. Any morning of the week, you could find him having coffee with his buds at Burger King or out cutting his grass and tending the yard, which he did almost up to his dying day. He is preceded in death by his wife (of 67 years) Josephine, his parents Ruth and Harold Fosberg, his sister, Marion Fosberg, and his great grandson, Reid Fosberg. He is survived by his two children, Larry (Betty) Fosberg and Sandra (John) Boyd, four grandchildren, Amanda Borden, Brent Bonner, Holly Padgett, and Tug Fosberg and six great grandchildren, Sierra, Eli, Drew, Conner, Sadie and Annison. A graveside service will be held Wednesday, September 9, 2020 at the Silverhill Cemetery at 10:00 in the morning. In lieu of flowers, the family requests donations be made in Bub’s name to Silverhill First Baptist Church or to Covenant Hospice who in his final days gave him the love and dignity that he deserved. Silverhill First Baptist Church, PO Box 246, Silverhill, AL 36576. Covenant Hospice, 5041 N 12th Ave. Pensacola, FL 32504. Arrangements by Mack Funeral Home, Robertsdale, AL.

In the early hours of September 7th Malcolm Harold &#8220;Bub&#8221; Fosberg of Silverhill passed away at his home, surrounded by family, at the age of 92. Bub was born to Harold and Ruth Fosberg December the 6th, 1927. He graduated from Robertsdale... View Obituary & Service Information

The family of Mr. Malcolm Harold "Bub" Fosberg created this Life Tributes page to make it easy to share your memories.