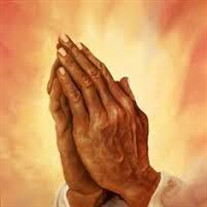 Louise Sawyer, age 82, a resident of Robertsdale, AL passed away Monday, May 28, 2018. Mrs. Sawyer was a minister&#8217;s wife and was a member of the Robertsdale Assembly of God Church. She was preceded in death by her husband, Rev. Herbert... View Obituary & Service Information

The family of Mrs. Louise Sawyer created this Life Tributes page to make it easy to share your memories.

Louise Sawyer, age 82, a resident of Robertsdale, AL passed away...