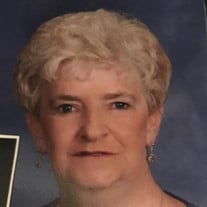 On Monday, October 26, 2020, Loretta Hamelin Roy passed away unexpectedly. She was the daughter of the late Julian Hamelin and Veronica Birden. Born in New York, January 25,1941, Loretta then moved to Torrington, CT. Loretta attended the Torrington School System graduating from THS with the Class of 1958. Loretta married the love of her life, Robert in August 1958. Loretta and Robert moved to Norfolk, VA and then Key West, FL while Robert served in the U.S. Navy. Loretta and Robert moved back to Torrington, CT to start a family. Later moving to Avon. After raising her family, Loretta and Robert decided to travel cross country and to Alaska in an RV. Later settling down in Lillian, AL. Loretta is predeceased by her loving son, James Robert and her stepbrother William Birden. Loretta leaves behind her beloved husband, Robert and her dog, Lucky. Her daughter, Deborah Incillo and husband, Ed. Her son’s Fred Roy of Canton, CT and Rick Roy of Barkhamsted, CT. Loretta also leaves her four grand children, Christopher and Joseph Incillo, Jayna Roy and Luke Roy, and her great-grandson, Noah. Loretta has siblings she leaves, Nancy Raykata, Joyce Millard, Raymond Birden, John Birden and Darlene Alfano. Loretta was always into her crafts. Many years of knitting and crochet, kept her busy and then she discovered her new passion of Quilting. She made many of quilts over the years for her family. A beautiful remembrance of her, we will have forever. Loretta and Robert spent winters in Lillian, AL and their summers in Otis, MA. The summers for Loretta were the best, because she got to spend them with her be- loved children and grandchildren. She will so be missed by them. Mack Funeral Home, Alabama is in charge of arrangements. There will be no calling hours. Her memorial with be at the convenience of the family. All memorial contributions can be made to the charity of the donor’s choice.

The family of Mrs. Loretta Hamelin Roy created this Life Tributes page to make it easy to share your memories.