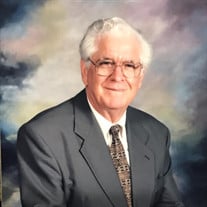 Lewis Young Hughes, 89, passed from this life on January 27, 2022. Mr. Hughes was born April 9th 1932 to parents, Richard Bartley Hughes and Eva Sheehan Hughes in Frisco City, Alabama. After serving in the Merchant Marines he settled with his family in Robertsdale, Alabama. Mr. Hughes owned several businesses, including convenience stores around Baldwin County. As his 2 sons and daughter started their own families he began to enjoy the role of “Paw Paw”, spoiling them with candy and small treats. Mr. Hughes loved to work on small projects around his home and instilled an appreciation for a well trimmed lawn and garden on his kids and grandkids. He enjoyed the fellowship of the Loxley Church of God with his beloved wife Penny. He was preceded in death by his son, Lewis Young Hughes Junior and grandson, Lewis Todd Hughes. Left to cherish his memory are his wife, Penny. Sisters Betty Mosley of Bay Minette and Mary Coleman of Excel, Alabama. His children, Larry Hughes and wife Lynn of Foley, their children Dwayne, Daniel, Cassie, Tammy, Natalie and Zack. Daughter Deborah Robinson and husband Steve of Foley, their children Michael, Shelly and Cameron. Grandson, Chad Hughes of Mauriceville, Texas. He is survived by numerous great grandchildren as well. The family will have a private graveside service Tuesday, February 1st at Silverhill Cemetery. In lieu of flowers, please make a donation to a charity of your choice.

The family of Mr. Lewis Young Hughes created this Life Tributes page to make it easy to share your memories.