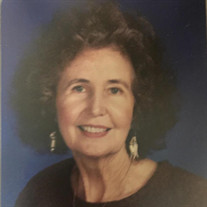 Laura Nell Thomaston, born to J C and Annie Hammock Newell on July 14, 1937 passed away on November 8, 2020 at the age of 83. A homemaker most of her life, Mrs. Thomaston also worked as a school secretary for many years at Spanish Fort Elementary... View Obituary & Service Information

The family of Mrs. Laura Nell Thomaston created this Life Tributes page to make it easy to share your memories.