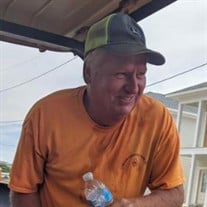 John Howard Vaughn, age 59, was the sixth child of ten children, born to Dorris and Hortense Vaughn on January 27, 1961 in Mobile, AL. John went to be with the Lord on May 2, 2020. He is survived by his loving wife of 35 years Pam Vaughn, his two sons and their wives: Tyler & Brenda Vaughn, Travis & Hannah Vaughn, and his two grandchildren: Leo and Tyler Hernandez. He is also survived by his parents: Dorris & Hortense Vaughn, his Mother and Father-in-law: Betty & Howard Bleuel, his nine brothers and sisters: Debra & Avon Fowler, Eugene Vaughn, Connie & Chris Hawkins, Paula & George Bechtold, Pam & Jerry Hahn, Doug Vaughn, James & Wendy Vaughn, Glen & Shellie Vaughn, Carol & Joel Coberly, his nieces and nephews: Brandon & Kendall Vaughn, Katie & Mathew Stokes, Chris & Jamie Hawkins, David & Savannah Hawkins, Lisa & Ken McLeod, Kenny & Laura McDonald, Rebecca McDonald, Daniel & Amanda Hahn, Emily Hahn, Zachary Hahn, Melyssa & Marissa Vaughn, Alaina, Nathan, and Weston Vaughn, Rachel Vaughn, Lowell & Shaun Vaughn, Hannah & Caleb Pope, Leanna Vaughn, Joey & Megan Coberly, Ashley and Kelly Coberly, Cassie and Catelen Myers and many precious great nieces and nephews. In life, he had a positive impact and touched so many. In death, he will forever be remembered. John was a wonderful husband who dearly loved his wife Pam and cherished their every moment together. The love they shared was an inspiration to everyone they knew. John was a respected member of his family and community, and many considered him the “Mayor of Seminole.” He had a heart of gold and no one could ask for a more loyal and honest friend. He had such a generous nature and would help anyone in need. John was a lot of things but basic wasn’t one of them. He was a man of many talents who over the years built homes, log cabins, suspension bridges, zip lines, barns, awesome swim holes and anything else he set his mind to. For most of his professional life, he worked as a heavy equipment operator and foreman for numerous construction companies. He was an incredible man who was an example of good, old-fashioned hard work, honesty and courage. He was a protector, provider and problem-solver all in one. He made a big difference in the lives of everyone he encountered. John was a devoted father who instilled a strong work ethic and taught his children to be men of their words. He supported his children by attending their many sporting events. He was affectionately called “Farmer John” and his home was well known as the hangout for their son’s many friends. He always made sure kids had fun and had plenty to eat. He was known for his sense of humor, being a practical joker, indulging children with bull rides on his back, and giving out his famous and painful Indian tortures that children begged for. He was an avid outdoors man teaching children how to hunt, fish, ride motorcycles, water ski and build. He was looked up to and loved by many children.

John Howard Vaughn, age 59, was the sixth child of ten children, born to Dorris and Hortense Vaughn on January 27, 1961 in Mobile, AL. John went to be with the Lord on May 2, 2020. He is survived by his loving wife of 35 years Pam Vaughn, his... View Obituary & Service Information

The family of Mr. John H. Vaughn created this Life Tributes page to make it easy to share your memories.