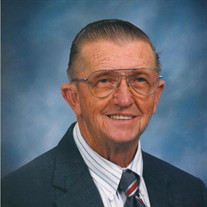 John William Ryan, Jr., age 91, a native of Decatur, Alabama and resident of Elsanor passed away on Wednesday, October 13, 2021. He was the son of Mamie and John W. Ryan, Sr. When he still a boy, John’s family moved to Louisville, Kentucky where his father worked at L&N Railroad. Although they lived in the city, John Jr. began raising homing pigeons that he trained by riding his bicycle with boxes of pigeons attached to the handlebars, then turned them out and raced home to try and beat the birds there. Throughout the years, his passion for pigeon racing remained strong and he joined a local pigeon club where he won many awards. Unfortunately when John was 15, his father suddenly passed away leaving his family without an income so they traveled by train to move near relatives in Robertsdale, Alabama. He faithfully supported and cared for his mother the remainder of her life. He joined the U.S. Air Force before he was 18 in order to provide financially for his mom. While in the Air Force, he became a top notch Air Force mechanic. After his discharge from the Air Force, he was proud to say he worked on many Air Force Thunderbirds and Navy Blue Angels aircrafts. In 1952, he married Jeanette Dyess. They purchased farmland a few acres at a time while rearing their three children in the home they mostly built themselves. His farming endeavors included growing soybeans, corn, various crops and watermelons, raising beef cattle, hogs, chickens and homing pigeons. John, a member of Bethel Baptist Church for 50 years, served as a deacon, Sunday School teacher, and Church Training Director. John acquired an aircraft mechanic job at Brookley Air Force Base in 1954. He traveled to various states to work on aircrafts. The per diem he saved while on these trips was used to purchase land. Later in life, he became involved in local politics working for the betterment of his community. After Elsanor School was destroyed by fire, John traveled to Montgomery to request funds from the governor to rebuild it. The governor granted financial resources for a new school and gym bringing much joy to the students and community alike. After retiring from Pensacola Naval Air Station for 32 years of service, John attended real estate school, received his broker’s license and started Ryan Realty. John enjoyed farming the land, deer hunting, fishing, and spending time with grandchildren. John is survived by his wife, Lola Jeanette, of 69 years, children Barry Ryan (Charlene) , Doyle Ryan (Maggie), and Twila Unsderfer (Ray), grandchildren Christina Stewart (Jared), Whitney Law (Orrin), Hannah Meeker (Josh), Josh Bilon (Meggie), Heather Thompson, Sean Ryan, Noah Ryan (Julie), great grandchildren Corbin Law, Reid Law, Conner Stewart, Luke Bilon, Blaise Bilon, and nieces and nephews. Funeral service will be held at Bethel Baptist Church in Elsanor, Monday, Oct.18, 2021 at 10:30 am, with visitation at 9:30 am.Burial will be in Bethel Baptist Cemetery.

John William Ryan, Jr., age 91, a native of Decatur, Alabama and resident of Elsanor passed away on Wednesday, October 13, 2021. He was the son of Mamie and John W. Ryan, Sr. When he still a boy, John&#8217;s family moved to Louisville, Kentucky... View Obituary & Service Information

The family of Mr. John William Ryan Jr. created this Life Tributes page to make it easy to share your memories.