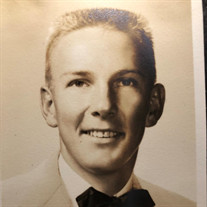 John Jordan Childress of Loxley, AL, passed away on Monday, October 19, 2020. Johnny, as he was known by friends and family, possessed a remarkable physical constitution, a determined mind and a deeply rooted faith in God and his Lord Jesus Christ that was the underpinning of his fighting spirit and his will of steel to live on, independently, in spite of the progressive, paralyzing effects of ALS which he experienced for more than 20 years. Born on September 9, 1937, Johnny was the third child of Paul Artelius Childress, Sr. and Verona Cooper Childress, both of whom preceded him in death. Johnny was also preceded in death by his oldest brother, Paul Artelius Childress, Jr and his older sister, Sarah Lyndal Childress Rinehart and two children, son John Barry Childress and an infant child. He is survived by his son, Kevin Ashley Childress, his brother, Aaron Thompson Childress as well as two grandchildren, Lacey Childress Murphy (Chris) and Justin Childress and one great-grandchild, Case Murphy. He is also survived by close family members including nieces and nephews, Paul Artelius Childress, III (Brenda), Kay Childress Wagner (Mike), Sarah Verona Bertolla Duncan, his primary caregiver for the past 20 years, Rosa Viola Bertolla, Harry B. Childress, Charles A. “Chuck” Childress, Louis George (Pam) Bertolla, Holly Childress Crawford (Mark) and Troy D. Childress (Jennifer) as well as many great nieces and great nephews. His dear friends from Seminole Baptist Church, Kenny and Sheila Pickels, continued to care for Johnny in times of need over the past several years. At 10 years old, Johnny raised and showed the Mobile County Reserve Champion steer. He often stood shoulder to shoulder with his father and siblings who also showed champion livestock. Johnny grew up not only working on the family farm (it has been said that he laid out the straightest crop lines of anyone, anywhere) but also enjoying many days and nights at the “River Swamp” family hunting camp on the upper Tensaw River. An avid turkey hunter and expert turkey caller, he also enjoyed deer hunting, fishing (especially), rodeo bull riding and steer-wrestling. He proudly displayed his prized turkey, fish and deer in his home. Though a life-long farmer by birth and by vocation, Johnny was a born engineer and could figure out a solution to any mechanical issue. A 1955 graduate of Robertsdale High School, the handsome Johnny was voted “Biggest Flirt” by his senior class and lived up to all that the name implied, even and especially in his later years. One always found him with a twinkle in his eye and his wit at the ready. Johnny was a kind and considerate man, both respected and beloved by his family and friends. Interment will be presided over by Mr. Childress’ Pastor, Ray Williamson. The service will take place at Greenwood Cemetery in Loxley, AL, on Sunday, October 25th at 2:00 p.m. In lieu of flowers, memorial contributions may be made to a fund for Kevin Childress, c/o Holly Childress Crawford or to a charitable cause of your choice.

John Jordan Childress of Loxley, AL, passed away on Monday, October 19, 2020. Johnny, as he was known by friends and family, possessed a remarkable physical constitution, a determined mind and a deeply rooted faith in God and his Lord Jesus... View Obituary & Service Information

The family of Mr. John Jordan Childress created this Life Tributes page to make it easy to share your memories.