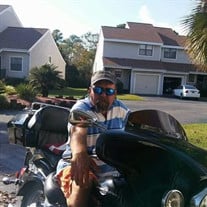 Jody Brown, age 50, a native of Theodore, Alabama and a resident of Orange Beach, Alabama passed away on Sunday, March 24, 2019. Jody enjoyed fishing and he loved his motorcycle. He was preceded in death by his wife, Rhonda Brown, father,... View Obituary & Service Information

The family of Mr. Jody Brown created this Life Tributes page to make it easy to share your memories.

Jody Brown, age 50, a native of Theodore, Alabama and a resident...