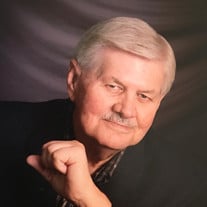 Reverend Jim H. Spencer Sr., age 74, a resident of Stapleton, Al, passed away Friday, January 5, 2018. He was born in Carey, MS on April 12, 1943 to Fenton and Hylda Moody Spencer and grew up in Mobile, Al. He was a member of Stapleton Baptist Church for the past 5 years. In 1964 he married the love of his life and best friend, Gloria Lambert. They met and married at Dawes Baptist Church in Mobile. They were blessed with two children, Michelle and Jimmy. His greatest accomplishment was his total involvement in the lives of his wife, his 2 children and 5 grandchildren. He was active and present in the things important to them, be it baseball, football, color-guard, wrestling, and other school or church events. They remember him as loving and caring, and a man who gave them all nicknames. He taught them to have strong Christian values and to be people of integrity. He was and is truly their hero. As a husband, he was equally involved, sharing in things his wife loved and enjoyed. In his free time, he was an avid Alabama fan and sports enthusiast. He loved reading, fishing, collecting knives, studying the Bible and traveling. However, spending time with family and friends was his favorite past-time. He was the type of person who never met a stranger because he was a true people person. He will be missed by all who were fortunate enough to have known this man of God, who lived his life by example. Reverend Spencer received his formal education by attending Mobile College. After accepting the call to ministry in 1969, he became the pastor at Rockville Baptist Church in Jackson, AL. His education continued at Mid-Western Seminary in Kansas City, MO. Over a span of 40 years he pastored churches in Hurley, MS, Kansas City, MO, Gilman City, MO, Thomasville, AL, and Loxley, AL. He retired from the ministry in 2005 and continued to serve as an interim pastor until 2009. He is survived by his wife, Gloria Lambert Spencer; daughter, Michelle Spencer Miskelley (Robert) of Trussville, AL; son, Jimmy Spencer (Gretta) of Fayettville, AL; granddaughter, Katelyn Miskelley of Trussville, grandsons, Kyle Miskelley and Simon Miskelley of Trussville; grandsons Trevor DeLoach and Nathan Epperson of Fayettville; brother, David Spencer (Barbara) of Semmes, AL; and many nieces and nephews, other loving relatives, and many, many friends. He was preceded in death by his parents, his sister, Hylda Faye Dean (Robert); and his brother Harry Spencer Sr. The family will receive friends at 10:30 a.m. this Monday, January 8, 2018 at Stapleton Baptist Church, Stapleton, AL. The celebration service of Rev. Spencer’s life will begin at 12:00. The family gratefully declines flowers, but will accept donations to the Stapleton Baptist Church youth department, 35460 Baldwin Avenue, Stapleton, AL 36578.

Reverend Jim H. Spencer Sr., age 74, a resident of Stapleton, Al, passed away Friday, January 5, 2018. He was born in Carey, MS on April 12, 1943 to Fenton and Hylda Moody Spencer and grew up in Mobile, Al. He was a member of Stapleton Baptist... View Obituary & Service Information

The family of Rev. Jim H. Spencer Sr. created this Life Tributes page to make it easy to share your memories.