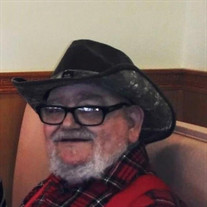 James E. “Jimmy” Goode was born at home and started his life on January 27, 1949 in Mullins, West Virginia. He left this world in Silverhill, Alabama and went to heaven on August 1, 2020. Jimmy was a man who loved the Lord, and he wasn’t afraid to tell you, and anyone who would listen, that the Lord loved them also! He enjoyed playing his guitar and singing praises to God at church and anywhere he could. Jimmy’s hobbies were fishing and hunting. Jimmy fought the good fight and finished his race and held on to his faith to the end. Jimmy is preceded in death by his parents, Leonard & Hattie Goode, four brothers, Dallas Goode, Albert Goode, Frankie Goode and Roger Goode; four sisters, Harriett Main, Sue Lester, Phyllis Green and Darlene Cantly and one son, Joseph “Joe” Goode. Jimmy is survived by his one sister, Sharon Dixon (Simon); his wife of thirty years, Barbara Goode; four sons, Jason Goode (Melanie), Justin Goode, Jeremiah Goode and Michael Thomas (Cherylynn); three daughters, April Padgett, Rebecca Kinman (Ricky)and Shelby Baker (Russell). Jimmy was blessed with four grandsons and nine granddaughters. A Celebration of Life service will be held at Christian Faith Assembly in Silverhill, AL on August 8, 2020 at 2:00 p.m.

The family of James "Jimmy" Goode created this Life Tributes page to make it easy to share your memories.

James E. “Jimmy” Goode was born at home and started his life...