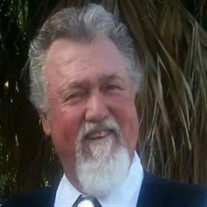 James Ralph Bradford March 31, 1947 – February 22, 2017 James Ralph Bradford was born on March 31, 1947 in Battles Wharf, Alabama. He passed away peacefully on February 22, 2017 at the age of 69 in Houston, Texas. At age 17, Ralph enlisted in the U.S. Marine Corps, serving with the KILO Company 3rd Battalion 7th Marines as a machine gunner and proudly served his country for three years. The 3rd Battalion, along with the rest of the 7th Marines, was deployed to Vietnam from Camp Pendleton in late May 1965. On August 18, 1965, the 3/7 took part in Operation Starlite involving 5,500 Marines. LCpl J.R. Bradford was released from active duty with honors on March 30, 1967 earning a National Defense Service Medal, Vietnam Service Medal with two bronze stars, and Presidential Unit Commendation Ribbon with one bronze star. After serving his country, Ralph married JoAnn Obert on August 10, 1967. In 1968, Ralph and JoAnn moved to Houston, Texas where they proudly raised their son, Frank William and daughter, Carrie Lorraine. Ralph founded Bradford Paint Company in 1975. After retiring in 1999, Ralph fulfilled his life long dream of living on the farm and raising chickens, goats, donkeys, pigs, cows, and any strays that wondered on his farm. From sun up to sun down, you could always find Ralph in the pastures tending to his animals, joy riding in his golf cart with a dog or two in tote, fishing at the pond, or on his tractor working the land. Ralph was an avid hunter for over 50 years. No matter what he was hunting it was always served for dinner … ranging from deer to hogs or squirrels to rabbits … you never really knew what the Bradford’s were serving you, but it was always delicious. This is a tradition he cherished with his son, son-in-law and grandsons. You can bet he will be looking down watching them carry on lessons learned from a great man. Ralph was truly one of a kind. He had a way about him that made everyone feel special and loved. Above all, he loved his family and friends dearly. He was a loving husband, doting father and grandfather, and the best brother and friend anyone could have. Ralph had a zest for life, contagious smile, and was a true friend to everyone. Ralph is survived by his devoted wife of 50 years, JoAnn; his son and wife, Frank and Angel Bradford; and his daughter and husband, Carrie and Tony Elliott; his grandchildren Justin, Bailey and Breanna, Jacob and Logan; Brother, Raymond Bradford; Sisters, Alla Mae Duke, Marie Walker, and Alice Johnson; His honorary Native American Indian brother Amon Sylestine and sisters Delores Johnson and Beryl Battise; Many relatives and friends who loved him dearly. Ralph is preceded in death by his parents, Clarence and Lola Bradford; Brothers, Bennett Alday, Coleman Bradford, and Earl Bradford; Sisters, Estell Wilson, Vivian Smith, Lillie Garrison, Hazel Duncan, and Betty Williams; Honorary Native American Indian brothers, Lowell Sylestine and Gordon Sylestine and sister, Janie Battise. Ralph was blessed with countless friends, and our family will forever be grateful to those great friends, doctors, nurses, and staff for their compassionate care and support during his pain and suffering. Ralph was always gracious even when faced with the unfortunate circumstances that led to pain and suffering. No matter how much pain he was in, he always welcomed visits from family and friends; had a smile on his face and asked how they were doing. Visitation will be held on Thursday, March 2, 2017 from 5:00 to 8:00 p.m. at Mack’s Funeral Home located in Robertsdale, Alabama. Services will be held on Friday, March 3, 2017 at 12:30 p.m. at Mack’s Funeral Home with a burial immediately following at the Alabama State Veterans Memorial Cemetery at Spanish Fort. Our family would like to thank you for your prayers, love and support during this time.

The family of Mr. James Ralph Bradford created this Life Tributes page to make it easy to share your memories.