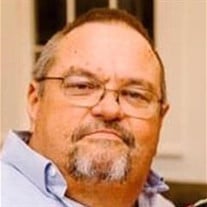 Jackie Howard French (October 7, 1957- December 16, 2019) Jackie Howard French, age 62, a native of Union, MS, and a resident of Foley, Al, passed away on December 16, 2019. He was a graduate of Mississippi State University where he received a degree in Communications. He used his degree to write sports for the Decatur Daily newspaper. While writing sports, he got to experience many great things such as the Masters Golf tournament, and he also had the opportunity to interview Paul “Bear” Bryant at his last game. He then moved to Madison, AL, leaving his sports writing career to become an Insurance Adjuster for Allstate Insurance, where he worked for 17 years. In the spring of 1986, he met Paula, and they were married in September of 1988. In his spare time, Jackie loved to cook for friends and family, and he also enjoyed his time spent with the Union Volunteer Fire Department. While he loved Paula, his greatest accomplishments were his 2 children, Skylar and Sam. They were the light of his life. He was a member of Clarke Venable Baptist Church in Decatur, MS. He was preceded in death by his parents, Willie and Lettie French. He is survived by his wife of 31 years, Paula French. 2 children, Skylar French, 19 years old, and Samuel French, 14 years old. A sister, Vicki Parker, and her husband, Wayne, of Loganville, GA. Several other family members In lieu of flowers, donations may be made to Snook Christian Academy, 18930 County Road 28, Foley, AL 36535. A celebration of life will be held at a later date in January.

The family of Mr. Jackie Howard French created this Life Tributes page to make it easy to share your memories.