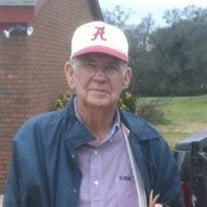 Mr. George Herbert Pittman, age 91, went to be with his sweet Ruthie on Wednesday morning, June 2, 2021 at Thomas Hospital in Fairhope, AL. George was 91 years old, a native and resident of Rosinton, Alabama, where he lived all his life on the Pittman Family Farm on County Road 64, Wilcox Road. There He took his bride Ruth to live in 1951. George was a graduate of Robertsdale High School, Robertsdale Alabama. He served as Corporal in the U. S. Army during the Korean War and returned to become a papermaker and farmer with his father Joseph (Joe) Pittman. He worked for St. Regis Paper Company, later Champion, and retired from Champion Paper Company in 1989 with 41 years of service. During those years he and Ruth reared four children, three daughters and a son. He helped his father Joe and mother Jimmie Lee farm the family land: planting, cultivating and harvesting soy beans, corn and watermelons, maintaining pasture for beef cattle and sheep, raising hogs and chickens for the family. In his early years on the farm, he and his father herded and branded range cattle in the woods north east of Loxley, Alabama and on County Road 64 each spring. After the loss of his father and mother, he continued farming with Ruth and the children. George enjoyed taking his family out to dinners at local cafes and dairy spins around the county and for many summers took the family to Gulf Shores for a week's vacation. He loved going to his son's ball games and daughters' school activities. After retiring from Champion and rearing his children, he and Ruth travelled with a travel club from Pensacola, making lifelong friends and visiting places in the U.S. His favorite places were Branson, Missouri and Cades Cove, Tennessee. He loved country music. When working shift work, he often went to sleep before night shift listening to Hank Williams. Until his last day at home, he enjoyed RFD TV featuring Grand Ole Opry and Branson theater performances. He enjoyed the wildlife and beautiful mountains of Cades Cove, visiting often with Ruth, children, and grandchildren. But perhaps his greatest fun was attending University of Alabama football games with Ruth, family, and friends. People around Central Baldwin often noted that they knew where George lived because of a red barn with the Crimson Tide A painted in white. But in recent years, his greatest pleasure was riding around the farm each day he could with Ruth on their Polaris to check the cattle and the gates and fences. Recently, neighbors have spoken of him as the "'Monarch of the community." With Ruth, he taught his children and grandchildren how to work in the farm fields, thinning, harvesting, and loading watermelons, clearing new ground, picking peas and beans, weeding soy beans, and herding cattle. He taught them how to hunt deer and how to clean the deer, skin squirrels, and clean birds for meat. He rarely missed games, activities, and graduations of his grandchildren. He was very proud of his family and often told people so. He and Ruth and family joined, attended, and supported Rosinton United Methodist Church, serving the Lord in any way they could. He was an active member in The Baldwin County Cattleman's Association. He was presented the Pioneer Cattleman Award in 1999 and was selected as Father of the Year by the Baldwin County Cattlewomen in 2006. He purchased a registered herd of Brahmin cattle. He petted them, named many of them, helped deliver calves, and continued adding to his herd over the years. George and Ruth did everything, except clothes shopping, together. George never wanted to be apart from Ruth. In recent years, they loved going to the Wellness Center in Fairhope, Alabama to exercise in the gym and visit with dear friends in the Coffee Room. The hardest part for George and Ruth during the Covid Crisis was missing all their dear neighbors and friends. But George called them often until his death to check on them. George is preceded in death by his mother Jimmie Lee Jordan Pittman, his father Joseph Pittman, his sister Jimmie Dee Pittman Price (Mardis), his brother Rudolph Pittman, his sister Irene Foley Harmon ( Wash Foley, deceased) ( Tom Harmon, deceased) , his sister Voncile Myers (Jim), and his wife of nearly 70 years Ruth Marie Taylor Pittman. He is survived by his four children, Donna Boswell( Bobby); Peggy Duck Branch (Jimmy, deceased) (Gary); Jo Anne Stapleton (Cliff); George H. Pittman, Jr. (Kristina); five grandchildren James Robert Duck, Jr, Melinda Harville (Scott), Robert Boswell, Jr.(Catherine), Austin Pittman (Heather), Cody Pittman (Lilah); three great grandchildren Hayden Harville, Mylee Harville, Cameron Harville; many nieces and nephews and grand nieces and nephews, all, whether nearby or far away, a huge part of his life through calls and visits. A graveside service will be held on Sunday, June 6, at 3:00 p.m. at Pittman Memorial Community Cemetery on Pittman Cemetery Road, County Road 64 extension, Robertsdale, AL 36567. Directions are on a website or call family for directions. The funeral service will be officiated by Pastor Chad Johnson of Rosinton United Methodist Church assisted by George's daughter Peggy Duck Branch. Upon George's request, the family asks that memorial donations be sent to Pittman Memorial Community Cemetery, sponsored by area churches, in care of Director Al Clingan, 29533 Co. Rd. 64, Robertsdale, Alabama 36567. Flowers may be sent to Mack Funeral Home, 22154 State Highway 59, Robertsdale, AL 36567. The family wishes to honor and thank the fine physicians, nurses, and health care providers in Central and South Baldwin County for helping provide their father 91 years of as healthy a life as possible. He respected them by trying to do everything they asked him to do.

Mr. George Herbert Pittman, age 91, went to be with his sweet Ruthie on Wednesday morning, June 2, 2021 at Thomas Hospital in Fairhope, AL. George was 91 years old, a native and resident of Rosinton, Alabama, where he lived all his life on... View Obituary & Service Information

The family of Mr. George Herbert Pittman created this Life Tributes page to make it easy to share your memories.

Mr. George Herbert Pittman, age 91, went to be with his sweet...