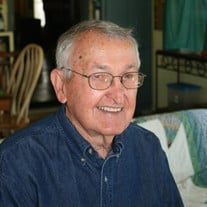 B. Gene Burton left this earth in the early morning on October 1st, 2018. He was born outside Daviston, AL on September 1st, 1931, the second child of Lois (nee Stephens) Burton and Oran Claude Burton. His family eventually moved to Prattville, AL, where his father was employed as a Police Officer and his mother an elementary schoolteacher – both exerting a strong influence on young Gene, instilling in him not only a desire to see justice applied equally to everyone, but a lifelong love of learning and education. He graduated from Autauga County High School in 1950 and followed his elder brother Herbert to the Alabama Polytechnic Institute in Auburn, where he earned a BS in Business Administration in 1953. He was employed at Rich’s Department Store in Atlanta, where he met his future wife Elizabeth Munro Groseclose, marrying her on April 2nd 1955 and embarking on a life-long journey of love and devotion. Throughout the next 40 years he was employed in administrative positions at several educational institutions, including Montreat-Anderson College in Montreat, NC, Valdosta State College (now University) in Valdosta, GA, Faulkner State Junior College (now Coastal Alabama Community College) in Bay Minette, the Alabama Institute for Deaf and Blind in Talladega, Wallace Community College in Selma, AL, and Reid State Technical College in Evergreen, AL. At every stop along the way, he was able to utilize his financial expertise to set his employers on more solid fiscal ground, but more importantly he managed to put himself in a position to indulge in his true passion – helping students achieve their educational goals. He worked tirelessly to counsel people of all ages seeking a college degree, often assisting them in finding financial aid or work study employment. He eventually retired in 1996 and settled in Silverhill. In the meantime, he was always actively involved in the life of his community and his church, raising a family, and enjoying the company of friends. He never shied away from hard physical labor – in fact his favorite weekend pastime was doing yard work in the hot sun. He was a man who loved his family, his friends, his church, and his alma mater. He truly knew how to enjoy life, and that real happiness came in helping others to enjoy it as well. He is preceded in death by his parents, Lois and Claude Burton, and is survived by his wife, Betty, his daughter Claudia (Duncan Brave) and his sons David (Charolette Bartush) and Frank (Melissa Wenner), three granddaughters and four grandsons. “Blessed is the man who finds wisdom, and gains understanding, for the profit of it is greater than that of silver, and the gain of it greater than gold.” Prov. 3:13-14 A memorial service will be held Saturday, October 6, 2018 at 3 p.m. at Mack Funeral Home Chapel. The family will begin receiving friends at 2 p.m. prior to the service.

B. Gene Burton left this earth in the early morning on October 1st, 2018. He was born outside Daviston, AL on September 1st, 1931, the second child of Lois (nee Stephens) Burton and Oran Claude Burton. His family eventually moved to Prattville,... View Obituary & Service Information

The family of Mr. Gene Burton created this Life Tributes page to make it easy to share your memories.

B. Gene Burton left this earth in the early morning on October...