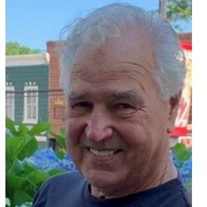 Born in his house in Loxley to Oscar and Della Middleton, Ernest Middleton began his life’s journey. Known only as “Boy” to his mother and “Shot” to his father, he loved to roam the Central Baldwin countryside on his horse, play with who would become lifelong friends, and work on the family farm beside his father and grandfather. Ernest joined the military after turning 17 and following his service, returned home to start his own family. As claimed by her, his pursuit of Bonnie Bernice Bishop of Fairhope was relentless and finally she succumbed to his charms in 1964 when they married. In 1965 Tonya became their first child followed in 1968 by their son Troy. Working side by side with his father, they built a thriving diesel mechanic shop for large trucks and equipment. From welding to engine repair there were few things Ernest and Oscar could not fix. He later started his own trucking company with his Son Troy as well as a successful tree Spade service. His hobbies included building dune buggies and airboats, restoring old trucks and cars, and making his trucks and cars go faster. Those who knew Ernest, knew him as a man of his word, a reliable friend willing to take on any challenge and lend a hand to anyone who would ask. A Big Man with an even bigger Heart, He was a role model to his peers, his children, and his grandchildren. A man to be reckoned if wronged, but also a man of great compassion towards his friends and family. We will miss his quick wit, his “can-do” attitude, his love for his family, and his great leadership. There is a void in the hearts of his family and friends which will never be filled. Honesty, Integrity, and reliability best describe the man called “Shot”. Preceding him in death include his Mother Della Estelle Middleton (Wright) and Father Oscar Eugene Middleton, and son Troy Brian Middleton. He is survived by his wife of 56 years Bonnie Bernice Middleton (Bishop), Sisters’ Barbara Gail Belew and Mary Elizabeth Marler, His daughter, Tonya Annette Granger, Grandsons’ Brandon Robinson and Jackson Newman, Granddaughter Lily Newman, and Great Granddaughter Ruthie Grace Robinson. A Memorial Gathering will be held Friday October 16th at 25456 County Road 54 East from 4pm to 8pm and a Graveside Service will by at 11:00am Saturday October 17th at Hail Memorial Cemetery located off Highway 90 just east of Robertsdale.

Born in his house in Loxley to Oscar and Della Middleton, Ernest Middleton began his life&#8217;s journey. Known only as &#8220;Boy&#8221; to his mother and &#8220;Shot&#8221; to his father, he loved to roam the Central Baldwin countryside on... View Obituary & Service Information

The family of Ernest Eugene Middleton created this Life Tributes page to make it easy to share your memories.

Born in his house in Loxley to Oscar and Della Middleton, Ernest...