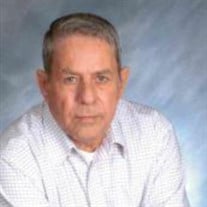 Ernest Jones, age 79, of Foley, AL passed away March 18, 2021 at his residence. Funeral services will be 11:00 am Saturday, March 20, 2021 at Mineral Springs Baptist Church with Rev. Melvin Mordecai officiating. Burial will follow in the church cemetery with Skelton Funeral Home of Reform directing. Visitation will be one hour prior to the service at the funeral home. He was preceded in death by his loving wife, Shirley Grace Keasler Jones; his parents; brothers, Hubert Jones and James Jones and sister, Virginia Jones Noland. Survivors include his daughters, Sherry Jones, Selena Jones and Sandy Jones, all of Foley, AL; sister, Revedoil Jones Davidson of Carrollton, AL; two grandchildren, Lacey McCollum (Clark) of Orange Beach, AL and Mitch Elkin (Erica) of Columbus, MS and three great-grandchildren, Bryce and Sawyer Jones and Amos McCollum. Ernest was born June 13, 1941 in Carrollton, Alabama to the late Willie L. and Sadie Smith Jones. He was country raised and a jack of all trades whose life’s work was dedicated to caring for his family, his nation and making America Great Again. A loving father and friend to all, Ernest was a devout Christian who loved Jesus and enjoyed humor, gardening, painting, fishing, spending time with hi four-legged friends and especially spending time with his grandbabies who were raised as his own. A veteran of Vietnam, he served his nation in the Army for many years moving his family with him all over the world from Germany to Kansas. After 22 years of service, Ernest retired as a E-8 Master Sargent after denying a promotion to E-9 in Alaska because he wanted to return his wife and three girls to their southern roots. After leaving the Army, Ernest worked as a lock operator for the U. S. Army Corps of Engineers for 20 years before retiring. Ernest was also a corn and cotton farmer and he spent his entire life devoted to his family, his grandchildren, his friends and his four-legged friends. Pallbearers will be Mitch Elkin, Clark McCollum, Gary Davidson, Danny Hartley, Randy Oswalt and Billy Strickland. Honorary Pallbearers are Fresnius Kidney Care, American Legion Post 99 in Foley, AL, Dept. of the U. S. Army, Tom Bevill Lock and Dam Corps of Engineers, Make America Great Again, Curtis and Cindy Hill, Barney and Linda Borders, Sonny and Patsy Cole, Celeste Glenn Donoho and family. In lieu of flowers the family requests memorials to Disabled American Veterans, 448 65th Street, Tuscaloosa, AL 35405 or the American Cancer Society, Mid-South Division, 1100 Ireland Way, Suite 300, Birmingham, AL 35205.

Ernest Jones, age 79, of Foley, AL passed away March 18, 2021 at his residence. Funeral services will be 11:00 am Saturday, March 20, 2021 at Mineral Springs Baptist Church with Rev. Melvin Mordecai officiating. Burial will follow in the church... View Obituary & Service Information

The family of Mr. Ernest Jones created this Life Tributes page to make it easy to share your memories.