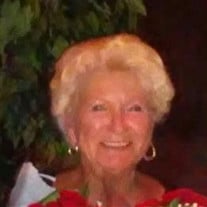 Ms. Erika Maria Goebel Bankston age 78 was born in Germany. She was a past resident of Bay Minette, Al and current resident of Gulf Shores, Al. Ms. Bankston came to the US at the age of 20 years old with her husband. Ms. Bankston is a member of Our Lady of the Gulf Catholic Church in Gulf Shores Al. and former member of St. Thomas by the Sea in Orange Beach Al. and St. Agatha’s Catholic Church in Bay Minette, Al. She earned her degree in Dietetics and Nutrition Management and practiced in that field for 28 years working at Villa Mercy Nursing Home in Daphne, Al. and North Baldwin Hospital in Bay Minette, Al. Ms. Bankston received the Baldwin County Business and Professional Woman’s Award and was also voted Alabama’s President of Hospital Dietetics and Nutrition Services in St. Louis, MO. She also received an Honorary United States Naval Food Service Officer Appointment from Captain Brown Commanding Officer for the Roosevelt Rhodes Navy Hospital in Puerto Rico for Exemplary Volunteer Services during Hurricane Georges. Her greatest love was teaching patients and young adults in her community the art of proper nutrition. After retirement to the Island she made a significant impact on her “Snowbird Friends” and local seniors for her talents in teaching Arts and Crafts and was the source of much laughter and excitement to everyone who knew her. She loved to travel, garden, craft, fish and crab and was a Fantastic cook…She was famous for her Yeast rolls and Sauerkraut! Ms. Bankston was preceded in death by her loving parents Ludwig and Adele Goebel and her husband Richard N. Rodgers. Survivors include one daughter Sonya A. Bankston of Foley Al., 2 sons Bruce N. Bankston(Patricia) of Bon Secour Al. and Alton F. Bankston(Celese) of Daphne Al. 4 grandson’s Justin F. Bankston, Matthew A. Bankston, Thomas A. Bankston and Nathan Bankston. Two sisters Regina (Erich) Manger and Rosalinde Koch, 2 brothers Norbert Goebel (Edith) and Hellmuth Goebel all of Germany. The Recitation of the Rosary will be at Our Lady of the Gulf Catholic Church in Gulf Shores, Al., Wednesday, December 27, 2017 at 10:30 and Mass will be celebrated at 11:00. Interment of Ashes will be at The Alabama State Veterans Memorial Cemetery at Spanish Fort to be scheduled at a later date. In lieu of flowers the family requests memorials be made to “Pilots for Christ” International www.pfcal.net in care of Tommy Lee Monroeville Al. or to St. Benedicts Catholic School in Elberta, Al. Arrangements are by Mack Funeral Home in Robertsdale, Al.

Ms. Erika Maria Goebel Bankston age 78 was born in Germany. She was a past resident of Bay Minette, Al and current resident of Gulf Shores, Al. Ms. Bankston came to the US at the age of 20 years old with her husband. Ms. Bankston is a member... View Obituary & Service Information

The family of Ms. Erika Maria Bankston created this Life Tributes page to make it easy to share your memories.