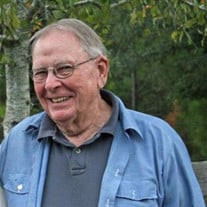 The gates of Heaven opened September 24th, 2019 and welcomed Doyle O’Brian Bare home. A current resident of Robertsdale, AL (Clear Springs community), he was born in Bellmont, IL to Arthur and Edna Bare on the 5th of March 1932, the 7th of 9 children. Doyle is preceded in death by his parents, siblings (Edith, Wilford, Duward, Dale, Joan, Arlene and Shirley Kay) and his first wife Shirley Bare. He is survived by his loving wife of 26 years, Donna Gail Bare, his children, Brian (Donna) Bare, Bruce (Dorothy) Bare, Kim (Tony Burke), Brad (Julie) Bare, Kim (Joe) Mathis, Tony Hare, Lisa (Tony) Nivison, Abby (Johnny) Hattaway, Lynn (Lynn Marie) Hare, his sister Evah Veihman, 20 grandchildren, 9 great-grandchildren and numerous nieces, nephews and friends. Doyle could accomplish anything he put his mind to. He served his country during the Korean War as a sergeant in the US Army. Returning to Chicago, IL to work for the original J.C. Penney store. Tired of the snow and cold, he moved to Orlando, Florida to start a career as a barber. He then went on to earn a bachelor’s degree in math and started his computer programming career on the Apollo project. He retired from federal civil service from NAS Pensacola. His passion was carpentry and he crafted many beautiful pieces. He used those talents and built houses and churches. Later in life when the carpentry became difficult on his body he took up quilting. Doyle’s family rejoices in knowing that he is in the presence of Jesus but will miss him terribly. They would like to extend a special thank you to Ms. Lucy Dubose, the staff at Amedisys, Community Hospice (especially Jaimie Howell), and Dr. Nicholas Drake and his staff for their support kindness and care during his illness. Visitation will be 1 pm on Friday September 27th at Clear Springs United Methodist Church, 27889 County Rd. 112, Robertsdale, AL 36567. Funeral will take place at 2 pm with graveside service immediately following.

The gates of Heaven opened September 24th, 2019 and welcomed Doyle O&#8217;Brian Bare home. A current resident of Robertsdale, AL (Clear Springs community), he was born in Bellmont, IL to Arthur and Edna Bare on the 5th of March 1932, the 7th... View Obituary & Service Information

The family of Mr. Doyle Bare created this Life Tributes page to make it easy to share your memories.