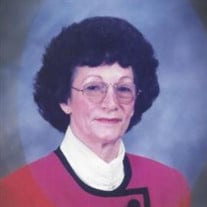 Dolores Johns Cooper, a native of Mobile, AL and longtime resident of Elsanor, AL, passed away on February 20th. Waiting to greet her in heaven are her beloved husband, Grady Gilbert Cooper, Sr., with whom she shared 64 years of marriage before his death in 2015, and her adored son, Grady Gilbert Cooper, Jr. She was also preceded in death by her parents, M.L.(Fate) Johns and Maudie Boutwell Johns, her brothers, Dewey Johns and Cecil Johns, and her sister Anna Faye (Tiny) Johns Merritt, along with her parents-in-law, Gilbert Cooper and Bessie Mitchell Cooper, and her brother-in-law, Donald Cooper, and sisterin-law, Glenda Cooper Lewis. Left behind to cherish her memories are her daughters, Carmelita Cooper Hartley of Loxley and Karen Cooper Robbins of Robertsdale, her sons by marriage, Carl Hartley, Jr. and Jimmy Robbins. She is also survived by her grandsons, Joshua Reding (Alicia Woods) of Saraland, and James Robbins of Atlanta; her three precious great-grandchildren, Mason Cooper, Ava Grace, and Charlotte Elise Reding; her sister, Sharon Johns Harbison (J.R.), her brother-in-law, Dr. Warner Merritt, sister-in-law, Mary Frances Middleton Cooper and many nieces and nephews, cousins, and a host of friends and associates throughout Baldwin County and the State of Alabama. Mrs. Cooper was a graduate of Robertsdale High School where she was valedictorian of her class. She married Grady Cooper in 1951 and went to work at Baldwin National Bank where she stayed until her family began arriving. After her children were all in school, Mrs. Cooper started college at age 32 at William Lowndes Yancey State Junior College in Bay Minette. After receiving her AA degree, Mrs. Cooper then attended the newly opened University of South Alabama in Mobile where she earned her Bachelor’s Degree, Master’s Degree, and AA Certification. Some years later, she entered the doctoral program of Auburn University, and received her Ph.D. in educational administration in 1988. She was a proud War Eagle! After receiving her Bachelor’s Degree, Mrs. Cooper joined the staff of Robertsdale Elementary School where she taught sixth grade for several years, then moved to Robertsdale High School, teaching history and civics. Upon receiving certification in Counseling and Guidance, she became the guidance counselor at Robertsdale High School and spent some years in that position. In 1981, Mrs. Cooper was chosen by the Baldwin County School Board to be the first principal of the newly built Gulf Shores Elementary School. She was very proud of the school and worked tirelessly to benefit the teachers and students there. Her next position was in the main office of the School Board, where she served as the Director of Public Relations. Among her many accomplishments in this position was the establishment of the after school care program for the Baldwin County School System. For many years, she wrote a weekly column titled “Chalk Talk” on education and the local education system for the local newspaper (The Independent/Onlooker/ Bulletin/Baldwin Times). Over the years, Mrs. Cooper was the recipient of many awards, including the Gayfer’s Career Woman of the Year (1992), President of the Alabama Community Education Association (1991), South Baldwin Business and Professional Woman’s Club Woman of the Year Award, and the James H. Faulkner State Junior College Outstanding Alumnus (1982). She was a long time member of Delta Kappa Gamma. A devout Christian woman, Mrs. Cooper was a lifelong member of Bethel Baptist Church in Elsanor, having joined the church as a 14-year old. Her involvement in the church was continual; she sang in the choir and taught Sunday School classes for many years. In fact, up until the COVID-19 epidemic struck last year, she was still teaching her weekly Sunday School class. Due to COVID-19 concerns, the family will hold a graveside service on Wednesday, February 24, 2021, at 10:00 a.m. at Bethel Baptist Church Cemetery in Elsanor. The family will begin receiving friends at 9:30 a.m. prior to the service. Masks and social distancing will be required. Pallbearers will be her sons-in-laws, grandsons, and nephews, Richard Harbison and Darren Rush. If friends and family wish to remember Mrs. Cooper, the family requests that donations be made to Bethel Baptist Church, P.O. Box 908, Robertsdale, AL 36567, or your favorite charity.

Dolores Johns Cooper, a native of Mobile, AL and longtime resident of Elsanor, AL, passed away on February 20th. Waiting to greet her in heaven are her beloved husband, Grady Gilbert Cooper, Sr., with whom she shared 64 years of marriage before... View Obituary & Service Information

The family of Mrs. Dolores Johns Cooper created this Life Tributes page to make it easy to share your memories.