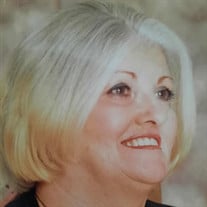 Ms. Dell Elizabeth Perkins Scherf, age 74, of Silverhill Alabama, passed away on Tuesday, May 3, 2022, from complications related to leukemia. Dell was a loving and devoted daughter, mother, sister, grandmother, aunt, and friend to many. While known by many names to those who loved her—Sister, Aunt Dell, Sister Dell, Dell Elizabeth—she was perhaps proudest of one moniker in particular—being affectionately known as “Monkee” by her grandchildren. Dell was a long-time member of Christian Faith Assembly in Silverhill, Alabama, and would joyfully tell all who would listen about her Lord and Savior Jesus Christ, His love, and her abiding faith in Him, which sustained and strengthened her, especially through the health battles she fought valiantly in recent years. Dell had many hobbies and interests: foremost among them attending church services and spending time with her family, participating in various women’s groups and other events at the church, baking, cooking (particularly Southwestern cuisine, learned during the many years she lived in New Mexico), singing, putting together puzzles, and watching classic Western movies. Ms. Scherf is survived by her siblings Barbara Calhoun (sister), Jackie Beisel (sister), Randy Perkins (brother) and his wife Becky Perkins (also a sister), all of Alabama. Monkee is also survived by her two loving grandchildren, Perrissa Bessent Sepmoree (Patrick), and Pearce Bessent, all of Virginia. Dell is also survived by numerous nieces and nephews, other family members, and her spiritual family from Christian Faith Assembly. Ms. Scherf was preceded in death by her parents, Robert W. Perkins and Gather E. Summerlin Perkins. Also preceding her in death was her beloved daughter Jacquetta Scherf Bessent, and newborn granddaughter she was never able to meet, Perstephanie Bessent, as well as her youngest brother, Rex Perkins. The family of Dell Scherf would like to extend our deepest and most profuse thanks to the teams of doctors, nurses, and other medical professionals who aided, befriended, and comforted her during her health battles over the last several years. In lieu of flowers, the family requests that donations be made in the name of Dell E. Scherf to the Leukemia and Lymphoma Society of America, or in the name of Sister Dell to Christian Faith Assembly. A Celebration of Life Service will be held at 10:30 AM, on Saturday, May 14, 2022, in the sanctuary of Christian Faith Assembly, on Hwy 104 in Silverhill, Alabama. All who wish to attend the service are invited to do so.

Ms. Dell Elizabeth Perkins Scherf, age 74, of Silverhill Alabama, passed away on Tuesday, May 3, 2022, from complications related to leukemia. Dell was a loving and devoted daughter, mother, sister, grandmother, aunt, and friend to many. While... View Obituary & Service Information

The family of Mrs. Dell Elizabeth Scherf created this Life Tributes page to make it easy to share your memories.