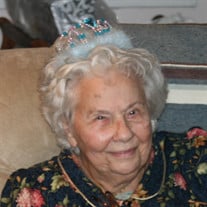 Corinna Elizabeth Harris Adams White, born April 7, 1921 in Tupelo MS passed peacefully in Slidell LA on January 5, 2018. Corinna was predeceased in life by her beloved Mother, Myrtis Herring Yates, by two loving husbands, Jerald Earl Adams Jr and Thomas Alan White; a son, Jerald Earl Adams III; and a grandson, Joshua Ruffin Adams. She is survived by two daughters, Corinna Adams Ethington Smart (Husband John; Memphis TN), and Randy Adams Lawshe’ (Husband Fred; Covington LA), five grandchildren: Christine Yates Ethington Marron (Virginia Beach VA), Donald Travis Ethington, Jr. (Blacksburg VA), Amanda Ethington, (Memphis TN), Corinna Elizabeth Adams Hayden (Husband Randy; Covington LA); and Zachary Adams (Wife Raven; Robertsdale AL). She is also survived by six great-grandchildren: Dara Marron, Joshua Hayden; Jason Hayden, Jessie Hayden, Brayden Adams, and Daxton Adams. As though having survived 96+ years, three children, six grandchildren, and six great-grandchildren is not enough of a footprint on this earth, Corinna made her own special mark on simply by being Corinna. As her children grew, Corinna not only worked with her husband in his medical practice, she made a home that was welcoming and warm to anyone and everyone who had the opportunity to become a part of their lives. There was always an extra place set at the table for those who happened by, and an extra bowl for any animals who followed the kids home. She very quietly went through life doing those things that she felt important…and inadvertently made a lasting impact on anyone who was fortunate enough to cross her path. After the passing of her 1st husband, she spent 15 years as a soul mate to her second husband, Tommy, worked side by side building houses and was especially proud of their endeavor, the sanctuary at the Robertsdale United Methodist Church. Obituaries are supposed to be for those who have passed. However, Corinna will always be with us, and has left a lasting impression on anyone who was fortunate enough to cross her path in life. Mack Funeral Home is handling the services. Visitation on Monday, Jan 8 from 6:00-8:00 pm at Mack Funeral Home with services following Tuesday at 10:00 a.m. at the Robertsdale United Methodist Church. Burial will be in the Galilee Baptist Cemetery, Stapleton, Alabama.

The family of Mrs. Corinna Elizabeth Harris Adams White created this Life Tributes page to make it easy to share your memories.