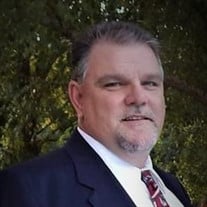 Charles Michael Long was born on July 26, 1967 to Barbara DeFoe Long and Charles H. (Bud) Long of Lawrenceburg, TN. He married Belinda Waddle June 21, 1997 and relocated to Robertsdale, AL while working in the gas and oil industry as a quality advisor for over 30 years. He was preceded in death by his mother Barbara DeFoe of Robertsdale, AL; and father, Charles H. (Bud) Long of Lawrenceburg, TN. He is survived by his devoted wife, Belinda Waddle Long of Robertsdale, AL; two daughters, Shelby-Claire Long of Nashville, TN; Megan Brooke Long of Summerdale, AL; and one son, Charles Alan Long of Batton Rouge, LA; his Mother-in-Law, Mary Waddle Chamberlain (Ron) of Robertsdale, AL; Step-Mother, Judy D. Long of Lawrenceburg, TN; one brother, Jeff Long (Lee) of Lawrenceburg, TN; three sisters, Dana Vick (Chris) of Springhill, TN; Melissa Gravois (Jerry) of Vacherie, LA; Sharon Hood (Alan) of Rainbow City, AL; three grandsons Kaison, Kohen, and Karsen of Summerdale, AL; and many, many nieces and nephews who will forever love their Uncle Mike. Today, August 9, 2021, we gave back a very special person to our Lord Jesus Christ. Although we know this is temporary, it is heart breaking to suffer his loss. Mike was an exceedingly special person to many people, but mostly to his wife, Belinda, and their children and family. He was a real man...the type of man who is responsible for, and takes care of his family. This required sacrifice, as he was often away from home working, but he did so willing and lovingly for his family. Mike was a proud and much-loved man who wore many titles: Husband, Daddy, Paw-Paw, Son, Son-in-Law, Brother, Brother-in-Law, and Friend to so, so many. He was a phenomenal friend, and more importantly, he placed great value on friendships and close relationships. He was always willing to lend a helping hand, offer advice or encouraging words, and motivate you to accept responsibility for your choices. He believed that success comes from a strong work ethic, personal responsibility, and sound decision making. While on the job, Mike’s knowledge, attention to detail, and diligence ensured successful work projects. Mike was a willing mentor to anyone who was looking to improve themselves. He knew that by helping others obtain knowledge and quality skills he was helping them to obtain opportunity and success throughout their lives. With heavy hearts we say, "Goodbye for now," to a man of character and strength, a warrior who loved his family; and we know that as each day passes, we come one day closer to being reunited with him again.

Charles Michael Long was born on July 26, 1967 to Barbara DeFoe Long and Charles H. (Bud) Long of Lawrenceburg, TN. He married Belinda Waddle June 21, 1997 and relocated to Robertsdale, AL while working in the gas and oil industry as a quality... View Obituary & Service Information

The family of Charles Michael Long created this Life Tributes page to make it easy to share your memories.