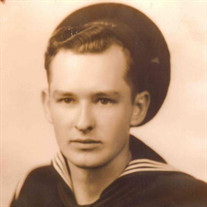 Born in Auburn, Alabama on November 28, 1921, to Henry Hubbard McLain and Iva Dean McLain, Cecil Ezell McLain was one of a kind. His lively personality, kindness, and generosity, touched everyone who came into contact with him. He is survived by his first wife of 73 years, Georgia Dyess McLain. They have three children, Pat Law, Mike McLain, Jo Ann Nix (Tony), four grandchildren, Brandon Nix (Serena), Jonathan Nix (Jessica), Rachael Utsey (Bradley), Emily Fiddler, (Austin), and four great-grandchildren, Cooper Nix, Chloe Nix, Camp Nix, and Gatlin Nix, a sister, Louise McLain Williams and many nieces and nephews. He moved to Robertsdale at the age to two. He graduated from Robertsdale High School in 1939. As past of the Greatest Generation, he served on the USS Tennessee in the South Pacific during WWII. He also served during the Korean War where he made “chief” in record time. He loved telling stories about his time in WWII. He was a self-employed electrician in Robertsdale until he moved to Orange Beach in 1984. He was a “world class piddler” who shared his passion with the world. He gave many “diamond pins”, wooden crosses, walking sticks, plaques, and exercise blocks, etc. to many friends as well as strangers. He was known for his jokes and one-liners such as “I’m 98 and still know who I am”, “I’m an endangered species”, “I don’t care what your mama says, you’re a good girl”, and “what’s the greatest lie I ever told. I’ll remember this”. He was also very proud of his Scottish heritage and had a “Clan McLain of Lochbuie” tent at many Scottish games all over the Southeast. He will be buried in his kilt. He was loved by many and will be greatly missed. In Cecil’s (Mac or Ezell) famous words, “Do me a favor. Have a goody day”. Graveside services will be held Saturday, August 8, 2020 at 10:30 a.m. from the Dyess Cemetery, 19691 Dyess Cemetery Road, Robertsdale, AL with Rev. Mitch Nelson officiating. Pallbearers are Brandon Nix, Jonathan Nix, Austin Fiddler, Bradley Utsey, Jacob Kirchharr and Joshua Kichharr. In lieu of flowers, memorials may be made to The Lighthouse Domestic Violence Center, P O Box 531, Robertsdale, AL 36567. Arrangements are by Mack Funeral Home & Crematory, Hwy 59 Robertsdale, AL.

Born in Auburn, Alabama on November 28, 1921, to Henry Hubbard McLain and Iva Dean McLain, Cecil Ezell McLain was one of a kind. His lively personality, kindness, and generosity, touched everyone who came into contact with him. He is survived... View Obituary & Service Information

The family of Mr. Cecil Ezell McLain created this Life Tributes page to make it easy to share your memories.