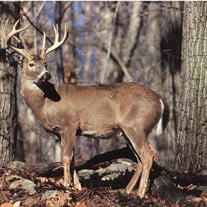 Bucky “Bo” Webb, 39 of Robertsdale, AL passed away on Sunday, May 28, 2017. Bo was born on June 30, 1977. He was a devoted husband, father, son, brother, and friend. He worked at ARC terminals for 16 years. He enjoyed spending time with family and friends, loved to laugh, and lived life to the fullest. He was an avid sportsman and was the world’s best deer hunter as he reminded us often. He will be remembered most for his dedication to his family, his ability to make everyone in the room laugh, and his love of sports. He was the first to make you laugh and the first to reach out when anyone needed him. Bo was preceded in death by his son, Jonathon Lamar Webb, grandfathers, Carl Sartin, Gene Putnam, Howard Webb, uncle, Mitchell Sartin, and aunt, Robbie Hayes. He is survived by his wife of 21 years, Denise Webb, daughter, Jersey Webb, two sons, Daniel and Anthony Webb all of Robertsdale, AL, two brothers, Casey Webb of Murfreesboro, TN, Zachary Chapman (Jessica) of Lafayette, GA, two sisters, Christy Anderson (Ricky) of Rossville, GA, Ashley Cobb (Logan) of Robertsdale, AL, parents, John and Rhonda Webb of Lafayette, GA, Shelia Heyde of Rossville, GA, grandmothers, Flora Webb of Lafayette, GA, Beatrice Putnam, Chickamauga, GA, father and mother in law, Donnie and Ann Hall of Rock Spring, GA and many aunts, uncles, nieces and nephews. A celebration of life service will be held Thursday, June 1, 2017 from 2-6 PM at the Webb residence located at 20185 Adams Acres Rd. Robertsdale, AL. In lieu of flowers, Bo would want you to make a donation to your local wildlife chapter. He loved to hunt and fish with his children. “If you teach your kids to hunt or fish, they’ll be too busy to get in trouble.”-Bo Webb.

The family of Mr. Bucky "Bo" Lawayne Webb created this Life Tributes page to make it easy to share your memories.