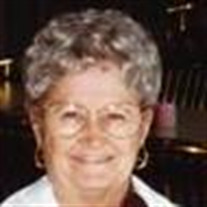 Betty Keller Vasut, November 2, 1931-August 24, 2018 - Betty was born in Bessemer, AL, moved to Robertsdale as a teenager, and graduated from Robertsdale High School. She married Charles F. Vasut, Sr. on July 22, 1951. She is survived by her brother, Robert Keller of Evans, GA., her husband, Charles Vasut, Sr., her children Vickie Vasut Linne (Richard), Robin Vasut Cillo (Nick), Teresa Vasut Ramey (Jody), Denise Vasut, Charles Vasut, Jr. (Laura Clinton), 13 grandchildren and 8 great grandchildren (with one more on the way). Betty lived an active life; primarily as a homemaker but also active in the Baptist church in Silverhill, Bethel, and Robertsdale. She was also active in the Robertsdale PTA. She worked in a local furniture store, Vanity Fair, family owned business, and helped raise several grandchildren. She enjoyed water skiing, oil painting, macramé, sewing, ceramics, and crochet. She and Charles enjoyed travel. They visited most of the continental United States, Alaska, Hawaii, Venezuela, many of the Caribbean Islands, England, the Netherlands, France, the Czech Republic, and Mexico. She visited the top of the Eiffel Tower, Notre Dame Cathedral, Windsor Castle, stood in the crater of a volcano, and cruised through the Panama Canal and the English Channel. She saw the world from high in an airliner and deep in the Pacific in a submarine. She lived a good, happy, life until the onset of Alzheimer’s disease. She will be missed, but her family celebrates in the knowledge that she leaves this world to live in Paradise. Funeral services will be held Monday, August 27, 2018 at 10:00 a.m. at the Robertsdale First Baptist Church with burial in the Silverhill Cemetery. A visitation will be held Sunday, August 26, 2018 from 6 p.m. until 8 p.m. at Mack Funeral Home. Arrangements by Mack Funeral Home, HWY 59, Robertsdale, AL.

Betty Keller Vasut, November 2, 1931-August 24, 2018 - Betty was born in Bessemer, AL, moved to Robertsdale as a teenager, and graduated from Robertsdale High School. She married Charles F. Vasut, Sr. on July 22, 1951. She is survived by her... View Obituary & Service Information

The family of Mrs. Betty Keller Vasut created this Life Tributes page to make it easy to share your memories.